The 4th Fazza Dubai Para Badminton International 2022 came to a close with a colourful ceremony, with Indonesia’s Fredy Setiawan and South Korean Kwon Hyunah emerging on top of the championships, winning three gold medals each at the Shabab Al Ahli Club on Sunday.

Setiawan overcame a second game scare from India’s Tarun Dhillon to pull off a surprise 21-11, 9-21, 23-21 win in the men’s singles final. Later, he combined with Dwiyoko Dwiyoko to win the men’s doubles match against fellow Indonesians Himmat Ramdani and Ukun Rukaendi, 21-18, 21-16.

“Even though I was trailing in the third game, I kept believing in my abilities. I tried to focus on one point at a time, and this worked for me. When Iplay, I don’t see any one player as the top player in my category as they are all equal to me.

“My main focus for now is to improve my physical strength in my training,” said the 30-year-old, who aims for gold in the ASEAN Para Games and World Championships. 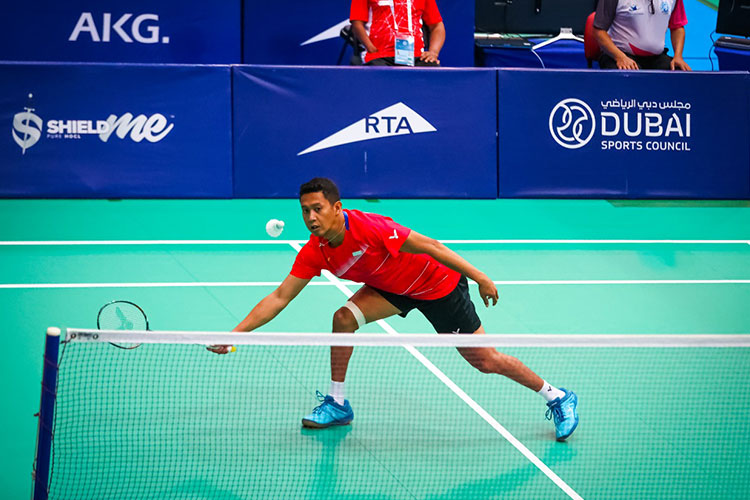 Fredy Setiawan in action on the final day of the 4th Fazza Dubai Para Badminton International on Sunday.

The Egyptian Shaimaa Samy Abdellatif was delighted to receive the women’s singles WH1 bronze medal, promising to come back stronger in upcoming events.

As many as 22 gold medal matches were played on the day, with Indonesia collecting the most with a total of 6 gold medals, followed by Korea (5), who also had Choi Jungman taking two gold medals in men’s singles WH1 and men’s doubles WH1-WH2. India too had their share of golden moments, picking up five gold medals thanks to the efforts of top shuttlers Pramod Bhagat and Manasi Joshi, besides promising Manisha Ramadass, who claimed two gold in women’s singles SU5 and women’s doubles SL3-SU5.

“I am happy with the way I played. But I will go back home and work on my defensive tactics. It’s tough to beat Daiki, he is very fast and comes back strongly,” said the 37-year-old Yuen.