The absence through injury of fast bowler Shaheen Shah Afridi is a “big loss” to Pakistan in the three-match Test series starting this week, England head coach Brendon McCullum said on Monday.

The lanky left-arm pacer — Pakistan’s main wicket-taker in all three formats — was left out of the series following a knee injury sustained during the Twenty20 World Cup final in Australia earlier this month. The 22-year-old also had his appendix removed earlier this month.

England practised for the first time at Rawalpindi stadium on Monday, a day after arriving in Pakistan on their first Test tour since 2005. The first Test starts on Thursday. 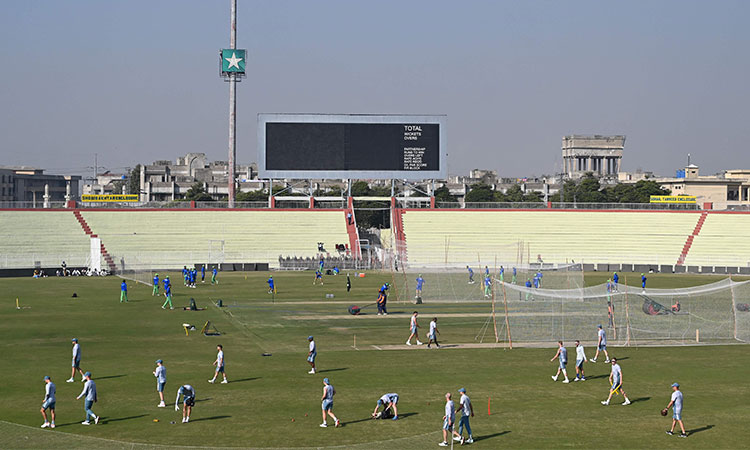 England’s players (front) and Pakistan’s players (back) gather for a training session in Rawalpindi. AFP

McCullum said Shaheen had made huge progress since he played with and then coached the fast bowler during the first two editions of the Pakistan Super League (PSL) in 2016 and 2017.

“I know him pretty well. He’s a wonderful bowler and he’s turned into a fine leader for Pakistani cricket,” McCullum told a press conference. “Shaheen’s obviously a big loss.”

In his absence, Pakistan will rely on young Naseem Shah as well as Mohammad Wasim Junior and Haris Rauf — who haven’t played at Test level. But McCullum praised Pakistan’s fast-bowling talent.

“You look at their team sheet and you see talent … you see some that might not be developed talent, but it’s talent.

“You need to respect that, and you need to find a way to be able to be well-researched and well-planned about what’s going to come at you.”

England were due to visit Pakistan last year but pulled out a week after New Zealand abandoned their limited-over series on security grounds minutes before the first match.

They then re-scheduled the tour in two phases, having visited Pakistan for a Twenty20 series two months ago. McCullum, who took over as England coach last year, admitted Pakistan would be strong at home.

“It’s a very good Pakistan squad, it’s well-rounded,” said McCullum, under who England have won six out of seven Tests.

“It’s got some experience and some youth – with both batting and bowling — and they’ll be a tough challenge. “We know we’ll have to play well if we’re going to be successful.”