Pakistan opener Shan Masood on Friday hit a second successive double century in the English county championship to take his aggregate to 608 runs in four innings.

Left-arm spinner Callum Parkinson finally claimed Masood’s wicket on Friday, bowling him with a ball that turned sharply from outside the left-hander’s off stump.

“If we are to do well, we need to make the big hundreds,” said Masood. “To get two double hundreds is pleasing. Making it big is always something we talk about.” 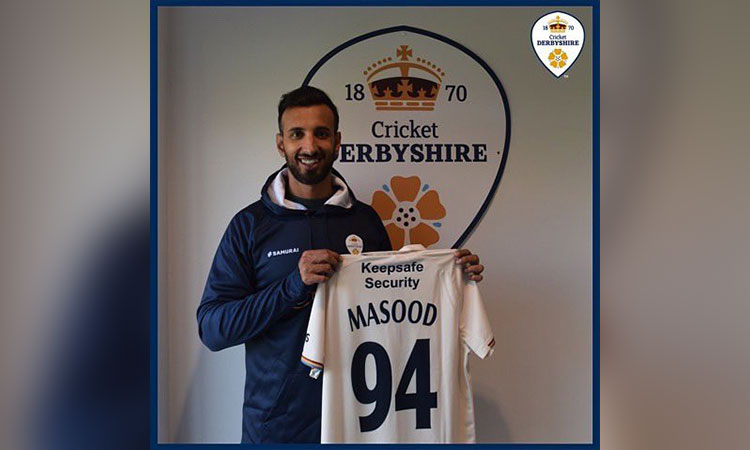 Shan Masood poses for a photo with his Derbyshire’s shirt in London. Twitter

Masood turned for the pavilion when he was out but could leave the field only after every Leicestershire player, led by Parkinson, had offered a handshake of congratulation on a superb exhibition of high-class batting.

Masood is the first Pakistani batter to score two double centuries in two consecutive innings in the county championship.

He is the 2nd Pakistani batter to do so in first-class cricket after Arshad Parvez, who had scored 243 (vs Balochistan) and 236 (vs MCB) in BCCP Patron’s Trophy in 1978.

The last time any Asian batter was able to score back-to-back double centuries in the county championship was before partition, in 1933, when Nawab Iftikharuddin scored 231 and 224 in 1933 for Worcestershire.

Masood was overlooked for Test matches against Australia. However, he has proved to be in the best form of his life by amassing overall 611 runs in just four innings he has played in the county championship this season.

Afridi dismissed Australian Test player Marnus Labuschagne for the second time in Cardiff to take his fourth wicket of the match.

At stumps, the Welsh county were 104-6 in their second innings, still 110 runs behind.