Sheikha Madiya Bint Hasher Bin Manaa Al Maktoum with other contestants at the start of the race. 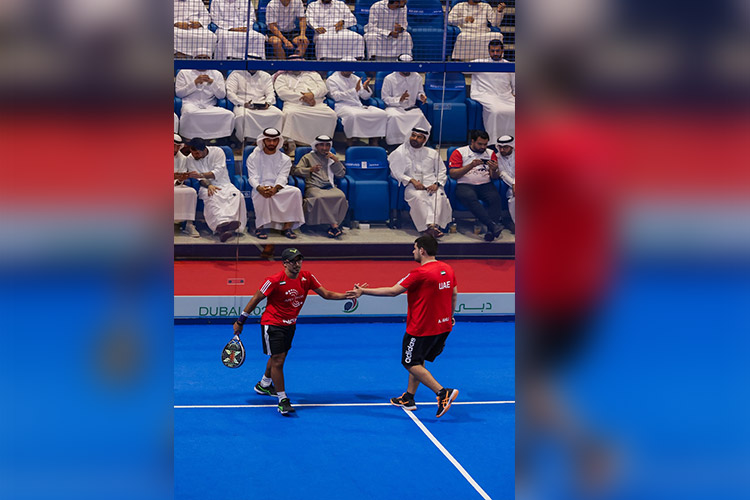 The Al Shafar Jumeirah team also won the men’s open title on Saturday, and victory in the Emirati Amateur Women’s category propelled them to the top spot in the standings.

The Dubai Municipality team topped the standings in their group of the wheelchair basketball championship with six points. With a 39-14 win over the Dubai Finance Department team, they have won all three matches they have played so far in the tournament.

Dubai Corporation for Ambulance Services are in second spot with five points after their 28-10 victory over Al Bustan Center and Residence team.

Al Thiqah Club for the Disabled are lying in the third spot with four points. They defeated the General Directorate of Residency and Foreign Affairs in Dubai, 38-14, in their last match.

Meanwhile, the UAE men’s and women’s teams have entered the final of the Gulf Padel Cup, a GCC Men’s Team Championship added to this year’s event for the first time.

In the men’s semi-final, the UAE defeated Bahrain 3-0. Faris Al Janahi and Hamad Al-Janahi began with a win over Youssef Qaid and Khaled Al Zawadi 7-6, 6-1. Omar Bahrozyan and Abdullah Ahli brushed aside Ali Abdullah Muhammad and Omar Muhammad 6-0, 6-3. Ahead of the third set, Bahrain pulled out, providing a smooth passage to the UAE in the final.

In the women’s semi-finals, the UAE edged past Kuwait 2-1, while Oman outlasted Saudi Arabia.