Players of Morocco listen to their national anthem in Al Khor, north of Doha on Wednesday. AFP

The Moroccan national team, which played among a large number of its fans at Al Bayt Stadium, drew without goals with Croatia, the runner-up of the last edition, in a match with few chances, in the first round of Group F of the FIFA World Cup in Qatar on Wednesday.

The effectiveness was absent in some attempts, and Moroccan goalkeeper Yassin Bono excelled in blocking Nikola Vlajic’s shot, and Luka Modric hit over the crossbar before the end of the first half.

Morocco’s closest attempt was in the second half, but goalkeeper Dominique Levakovic saved Nosair Mazraoui’s header, then Ashraf Hakimi’s powerful shot after a free kick.

Midfielder Sofiane Amrabat made a save before crossing the line after a low shot from striker Ivan Perisic.

Striker Abd al-Razzaq Hamdallah, who returned to international matches after a long absence for disciplinary reasons, participated in the final minutes instead of the unsuccessful Youssef Al-Nusiri, but he did not have a chance to threaten the goal. 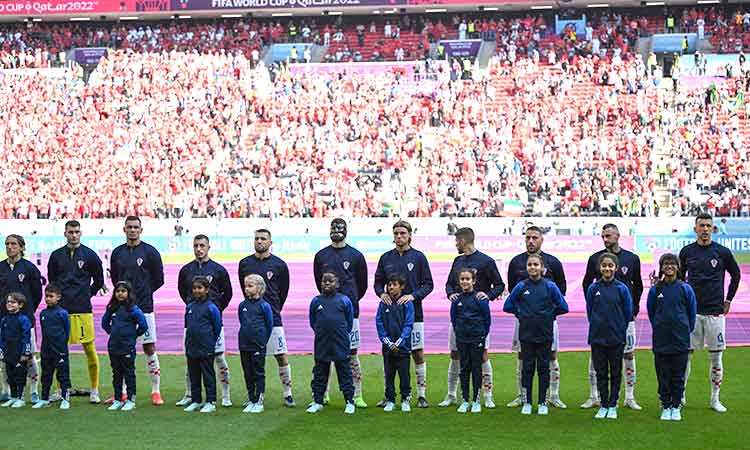 Players of Croatia listen to their national anthem in Al Khor, Doha, on Wednesday. AFP