Rilee Rossouw blasted 109 and shared in a record-breaking stand with Quinton de Kock as South Africa crushed Bangladesh to kickstart their Twenty20 World Cup title charge in Sydney on Thursday.

The pair came together after Temba Bavuma fell in the first over and powered their team to 205-5. Bangladesh were dismissed for just 101 in the 17th over with Anrich Nortje taking 4-10.

After Bavuma’s dismissal it was all South Africa with Rossouw and De Kock putting on 168 for the second wicket, surpassing the 166 that Sri Lanka’s Mahela Jayawardene and Kumar Sangakkara made against the West Indies in 2010.

De Kock fell for 63 the next ball but Rossouw charged on, bringing up the first century of the tournament and only the 10th scored at any T20 World Cup.

He was eventually out going for another big hit, ending a 56-ball knock in which he smashed eight sixes and seven fours. It was the fifth highest score at a T20 World Cup. 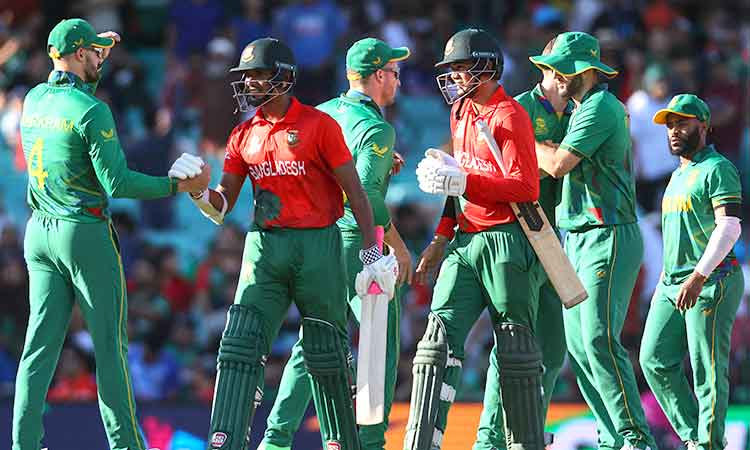 Players from South Africa and Bangladesh shake hands after the match at the Sydney Cricket Ground. AFP

The blitz set up the Proteas for a much-needed Group 2 victory after their opening match on Monday against Zimbabwe in Hobart was washed out and the points were shared.

Bangladesh opened their campaign with a nine-wicket win over the Netherlands, but they have a poor record against top teams at World Cups, and had not won any of their seven previous T20s against South Africa.

Bavuma won the toss and batted first but the South African skipper was out cheaply again as his awful form continued.

Speedster Taskin Ahmed was coming off career-best figures of 4-25 against the Dutch and coaxed an edge with his raw pace that carried to Nural Hasan behind the stumps.

But that was as good as it got for Bangladesh as De Kock and Rossouw pummelled Ahmed for 21 in his next over as they took control.

The pair bludgeoned fours and sixes around the ground and brought up their 50-partnership in four overs, only to be interrupted at 60-1 in the sixth over when light rain began falling.

They resumed the onslaught after a 22-minute break, where no overs were lost.

They went on to demolish the Bangladesh attack before De Kock was caught at long-on off Afif Hossain for 63 off 38 balls in the 15th over with the score on 170. Rossouw brought up three figures before ballooning a catch to Liton Das.

Bangladesh’s intent was clear when they began their chase, with the openers taking 17 off the first over from Kagiso Rabada.

But the cavalier approach cost them with Nortje picking up two wickets in the same over. Soumya Sarkar (15) edged to wicketkeeper De Kock and Najmul Shanto was clean bowled.

Nortje bagged a third, and a big one, in his next over, with skipper Shakib Al Hasan trapped lbw for one. Then Rabada took care of Afif Hossain (1), top-edging a pull to Wayne Parnell at mid-off.

It left Bangladesh in trouble at 47-4 in the sixth over. Mehidy Hasan lasted 13 balls and Mosaddek Hossain just three before the tail was quickly cleaned up with the last four wickets falling for 25.