Lungi Ngidi (2nd L) celebrates with teammates after the dismissal of Cheteshwar Pujara (not seen) during the first day of the first Test match at SuperSport Park in Centurion on Sunday. AFP

India progressed to 157-2 at tea on the opening day of the first Test in South Africa on Sunday after being forced to recover from two wickets in two balls by Lungi Ngidi.

The South African fast bowler removed opener Mayank Agarwal for 60 and then Cheteshwar Pujara first ball to revive the home team after lunch, and after India made a solid start at SuperSport Park in Centurion.

The Indians were 83-0 at lunch. Agarwal and fellow opener KL Rahul went on to put on 117 for the first wicket before Ngidi gave South Africa a glimpse of hope.
Rahul was 68 not out and India captain Virat Kohli 19 not out alongside him at the tea break, although Kohli had faced 54 balls to indicate how the touring team had been forced to regroup after Ngidi’s double strike. 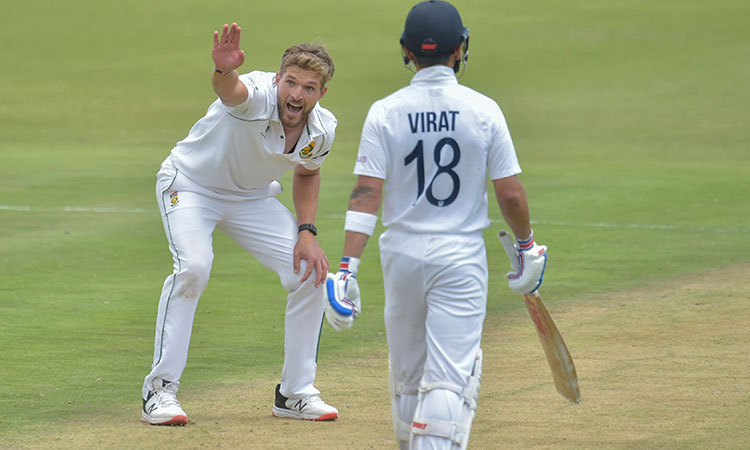 Wiaan Mulder (L) unsuccessfully appeals for a leg before wicket during the first day of the first Test match at SuperSport Park in Centurion. AFP

India made a strong start to its latest quest for a first test series win in South Africa by going through the first session without losing a wicket. Kohli had won the toss and opted to bat first at SuperSport Park.

Agarwal was dropped by wicketkeeper Quinton de Kock in that morning session – a tough chance from an edge that de Kock dived to his right for but couldn’t hold one-handed. That denied 6-foot-8 South Africa seam bowler Marco Jansen a wicket on his test debut.

Ngidi eventually removed Agarwal lbw after a review, and the quick struck again straight away when Pujara was caught at short leg next ball, offering South Africa some hope that they might reign in the Indian batters.

The three-test series is the first assignment away from home for new India coach Rahul Dravid and the team started its search for that maiden series win in South Africa on its eighth test tour to the country with no major surprises in its lineup. Jasprit Bumrah will lead a four-man seam bowling attack with Shardul Thakur, Mohammed Shami and Mohammed Siraj backing him up.

South Africa gave Jansen his international debut in the absence of Anrich Nortje, its most effective fast bowler who is out of the series with injury. Fast bowler Duanne Olivier, who has returned from a spell playing in England and is back in South Africa’s squad, was not recalled by the home team despite being widely tipped to return.

US dollar gains as investors brace for higher rates