Spinners Prabath Jayasuriya and Ramesh Mendis shared nine wickets between them as Sri Lanka beat Pakistan by 246 runs in the second Test to end the series 1-1 on Thursday.

Chasing a mammoth 508 for victory, Pakistan were bowled out for 261 in the second session on day five with skipper Babar Azam hitting a valiant 81 in Galle.

Earlier, Sri Lanka’s hopes of winning the second cricket Test took a hit as Pakistan reached 89-1 in its second innings at stumps on Wednesday after being set an improbable target of 508.

Play on the fourth day ended early because of bad light with 26 overs lost. Only six overs were possible after tea.

Pakistan need another 419 runs to win but the more realistic prospect is for the tourists to try and bat through the final day to draw the game and secure the series. Pakistan lead the two match-series 1-0. 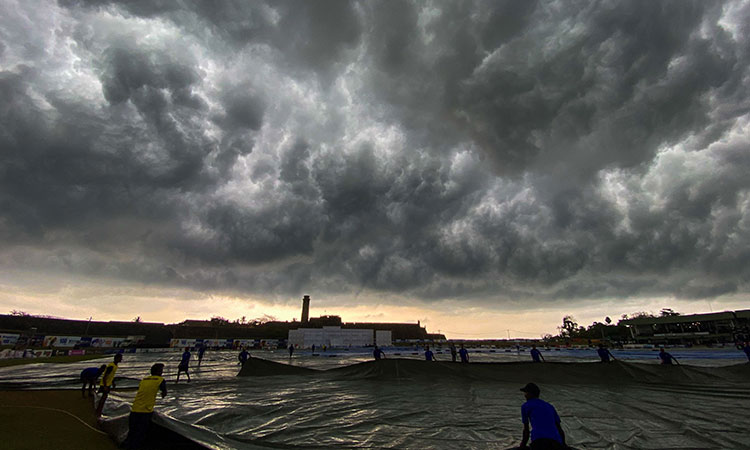 Ground staff cover the cricket pitch as the match gets delayed due to bad light at the Galle Cricket Stadium. AFP

Openers Abdullah Shafique and Imam-ul-Haq added 42 runs for the first wicket, seeing through the first hour of what looked like a long grind for Pakistan.

Shafique, who scored an unbeaten 160 in the first Test when Pakistan successfully chased down 342 runs to set a record at Galle, was dismissed for 16. He was spectacularly caught by debutant Dunith Wellalage, who ran from mid-on, off a delivery from Prabath Jayasuriya (1-46).

Captain Babar Azam joined Imam and looked comfortable against spin as they added an unbroken 47 runs for the second wicket.

After the 28th over of the innings, the Pakistan batters successfully complained to the umpires that they could not see the ball. Imam was unbeaten on 46 when play was called off and Babar 26 not out. 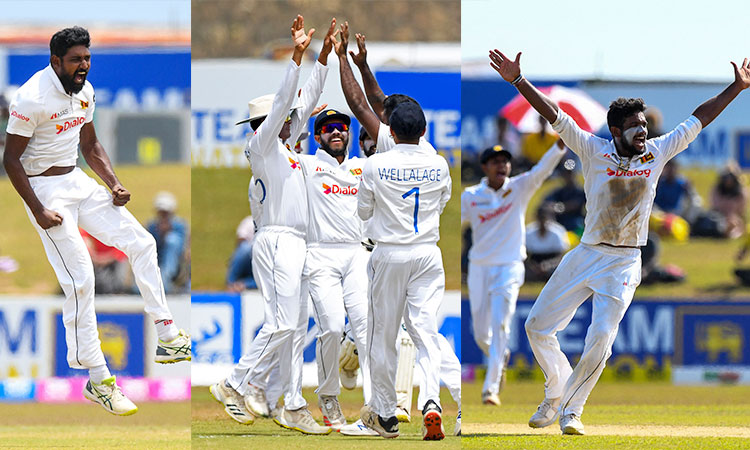 “There’s only two results possible in the game and our chances of winning took a severe beating because of bad light,” Sri Lanka vice-captain Dhananjaya de Silva said. “But if we get a few early wickets in the morning, we could still turn things around. There are a few rough areas on the pitch and we need to show discipline while bowling.”

Pakistan already needs to set a world record to win this match, topping the West Indies’ 418 against Australia in 2003 as the highest-ever successful fourth innings run chase. But the Sri Lankans were cautious about a declaration with a run-friendly surface and Pakistan having, in Babar, one of the best batters in the world.

Sri Lanka declared its second innings on 360-8 after resuming on 176-5. The overnight pair of de Silva and Dimuth Karunaratne shared 126 runs for the sixth wicket to consolidate Sri Lanka’s position.

Karunaratne, who was pushed down to the middle order because of a back problem that restricted his fielding, posted his 31st test half-century and in the process became just the sixth Sri Lankan batter to score 6,000 career test runs.

He was dismissed for 61 – when Abdullah Shafique pulled off a good reflex catch at short leg off Nauman Ali (1-54) – before de Silva went on to post his ninth test hundred, after only one half century in 12 innings this year. One of de Silva’s 16 boundaries, an elegant cut against Mohammad Nawaz (2-75), brought up his hundred.

De Silva added 82 runs for the eighth wicket with Ramesh Mendis as Pakistan had to further toil on the field. Mendis was rarely troubled during his 55-ball 45 not out, including five fours, giving an indication of the docile nature of the pitch.

Sri Lanka had been waiting for Mendis to complete his first half-century in test cricket but de Silva was run out for 109 when Yasir Shah from mid-on came up with a direct hit. Sri Lanka declared the innings at that point.

Pakistan batting coach Mohammad Yousuf was confident that his team can bat through the final day. “We had a similar game against Australia early this year in Karachi where we had to bat 170 odd overs to save the game. We did it on that occasion. Babar played an excellent innings of 196 … The way Babar and Imam are playing it will be an interesting day tomorrow.”

The series is being played against the backdrop of Sri Lanka’s worst economic crisis since independence. There is a severe shortage of fuel, medicine and cooking gas and economic experts have warned of a pending food crisis.