Sri Lanka’s players walk back to the pavilion at the end of the Pakistan first inning during the third day of their second Test match at the Galle International Cricket Stadium in Galle on Tuesday. AFP

Ramesh Mendis completed a five-wicket haul as Sri Lanka bowled Pakistan out for 231 to take a 147-run first-innings advantage on Tuesday before extending its lead to 323 when the third day of the second test ended early because of bad light.

Sri Lanka was 176-5 in its second innings at stumps at Galle International Stadium.

Sri Lanka will still be cautious after Pakistan impressed in the first test. The hosts had set a target of 342 but Pakistan won by four wickets in the last session of the final day with a record successful chase at Galle.

“The pitch has got slower,” Mendis said.

Karunaratne, who is struggling with back spasms, only came out to bat after the fall of the fourth wicket.

He was feeling uneasy while running between the wickets but was unbeaten on 27 when play was called off with 19 overs left.

De Silva dominated the partnership as he posted 30 not out off 52 deliveries with six fours.

Niroshan Dickwella opened the batting in place of Karunaratne and was caught behind off Naseem Shah (2-29) when he chased a wide delivery without any feet movement.

The spin trio of Yasir Shah, Mohammad Nawaz and Agha Salman picked up a wicket apiece to keep Pakistan interested as Sri Lanka lost four wickets between lunch and tea, going from 22-0 to 109-4.

Naseem came back for a second spell later in the day to dismiss Dinesh Chandimal (21) in similar fashion to Dickwella.

Sri Lanka was 117-5 and only had a lead of 264 at that point but the partnership between Karunaratne and de Silva gave the advantage to the hosts. 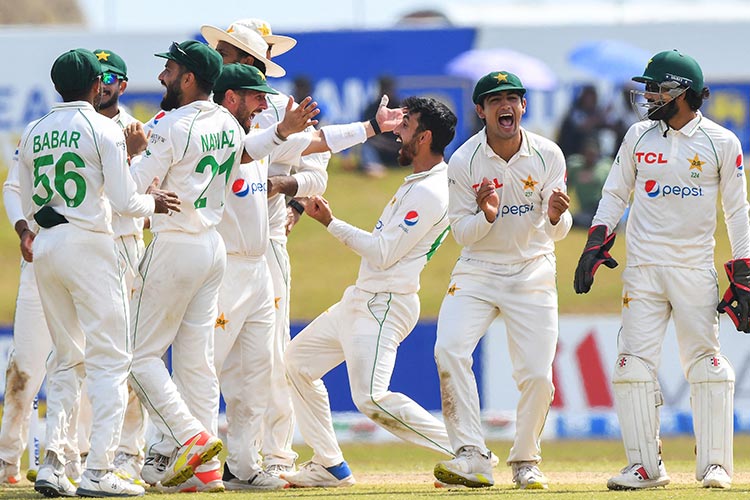 Earlier, Pakistan resumed on 191-7 and added only 40 runs in the morning.

Yasir Shah (26) and Hasan Ali (21) added 32 runs for the eighth wicket batting out the first hour of the morning.

However, there was not much resistance from the rest of the tail as off-spinner Mendis accounted for the last two wickets to return 5-47 from 21.1 overs, his third five-wicket haul in a test innings.

Mendis was almost dropped after his poor performance in the opener.

“I was disappointed with the effort in the first test. I knew Prabath Jayasuriya is bowling so well and I needed to support him by building pressure and by sending down dot balls,” Mendis said.

“That worked and (I’m) happy to end with five wickets in the innings.”

The series is continuing despite economic and political turmoil in the island nation, which has led to severe shortages of essential items such as fuel, cooking gas and medicine.

Protesters from across the country gathered in the capital Colombo earlier this month to oust President Gotabaya Rajapaksa, who had to flee the country.

The second test was scheduled for Colombo but was shifted to the coastal town of Galle fearing trouble in the capital.

Naseem, who has taken five wickets in the match so far, said Pakistan would be comfortable with a big run chase.

“We will try to restrict them and get a target of around 350-360,” he said. “Bowl them out soon tomorrow and stay positive during the chase.”