Ebadot Hossain salutes as he celebrates after taking the wicket of Dinesh Chandimal (C) during the second Test match in Dhaka on Thursday. AFP

Angelo Mathews and Dinesh Chandimal hit centuries as Sri Lanka raised hope of winning the second test after reducing Bangladesh to 34-4 on day four on Thursday.

The host still needs 107 runs with six wickets remaining on the last day to force Sri Lanka to bat a second time. Bangladesh was in survival mode after its hope of a first home series win over Sri Lanka was shattered.

Mushfiqur Rahim and Liton Das, who helped Bangladesh recover from 24-5 to post 365 on Tuesday with a record 272-run partnership, were in the middle at stumps after another top-order rout. Mushfiqur was 14 not out and Liton on 1.

“If someone can bat like Mushfiqur or Liton, there is a chance to save the Test,” Bangladesh left-arm spinner Shakib Al Hasan said.

“Hopefully, Mushfiqur and Liton can bat till lunch, and then if I can bat for three hours anything can happen.” 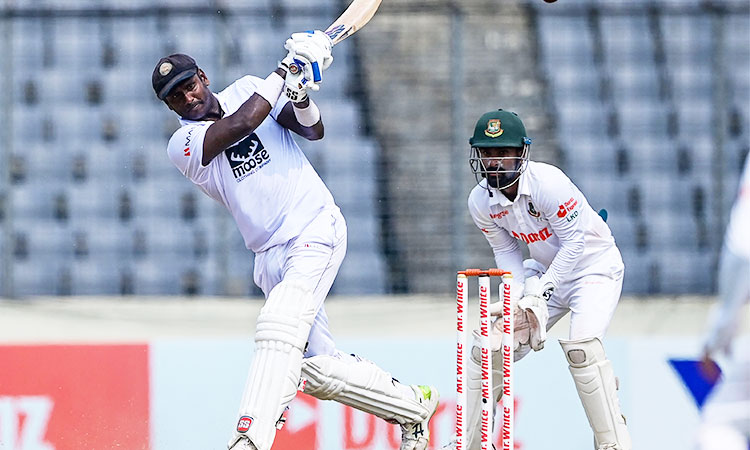 Angelo Mathews plays a shot during the fourth day of the second Test match at the Sher-e-Bangla National Cricket Stadium. AFP

Mathews and Chandimal combined for 199 runs for the sixth wicket to take the game away from Bangladesh, despite left-arm spinner Shakib’s 5-96.

“The early morning session tomorrow is important for us,” Oshada Fernando said. “We would love to go all out attack. They still have Shakib and Mosaddek (Hossain) to come. So we need to bowl well.”

The day’s play started 30 minutes early to make up for time lost on Wednesday, and Mathews and Chandimal, resuming on 58 and 10 respectively and their team on 282-5, rode their luck.

Mathews, dropped on 37, scored briskly to reach his 13th century off 274 balls, pushing a Mosaddek delivery to midwicket for a single. Soon after, he overturned an lbw decision. 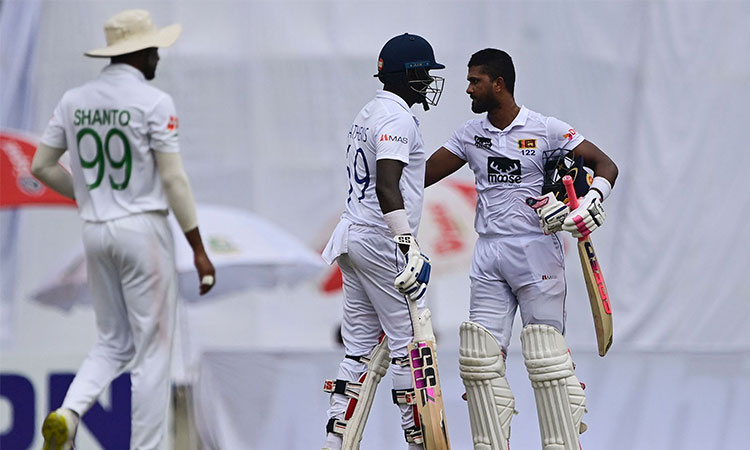 Dinesh Chandimal (R) celebrates after scoring a century with teammate Angelo Mathews (C) during the the second Test. AFP

Chandimal, who raised his 12th century off 181 balls, got successful video reviews on 43 and 75. But after two wicket-less sessions, Bangladesh hit back with five wickets for 41 runs. Chandimal’s dismissal started the collapse.

Shakib joined the party and completed his 19th test five-for when Praveen Jayawickrama poked a tossed-up delivery to wicketkeeper Liton Das for a duck. Ebadot took 4-148 and Asitha Fernando was run out to leave Mathews stuck on 145. Mathews faced 342 balls and hit 12 fours and two sixes.

A disciplined Sri Lanka attack then put the visitors in complete command with pacer Asitha Fernando leading the way with 2-12. He dismissed opener Tamim Iqbal for an 11 ball-duck to give the batter a pair for the first time in his 14-year career.

Fernando also had opener Mahmudul Hasan caught by Kusal Mendis for 15 after the batter survived two strokes of luck.

Najmul Hossain was run out on 2 and captain Mominul Haque’s lean streak was extended to a seventh straight single-digit figure when Kasun Rajitha dismissed him for a duck.