Dimuth Karunaratne (L) and Pat Cummins pose with the Warne-Muralitharan Test trophy after Sri Lanka won the second Test match against Australia at the Galle Cricket Stadium on Monday. AFP

Sri Lanka took nine wickets in one stunning session to defeat Australia by an innings for the first time in Test cricket and square their short series 1-1 on Monday.

Australia was all out for 151 in its second innings to lose by an innings and 39 runs with a day left at Galle Stadium in a shocking turnaround. Sri Lanka lost the first Test in three days by 10 wickets on the same ground last week and couldn’t pick four players because of the coronavirus.

The home side debuted three players, one of them left-arm spinner Prabath Jayasuriya, who took 6-59 in the second innings after 6-118 in the first to achieve the fourth best figures — 12-177 — in Test history for a debutant.

Jayasuriya backed up Dinesh Chandimal’s maiden double century, 206 not out, which led Sri Lanka to 554, its highest total against Australia, and a lead of 190 runs. Australia was 52-1 at tea on Monday and in good shape. But mayhem ensued after the break as Australia lost nine wickets for 99 runs in 26 overs. 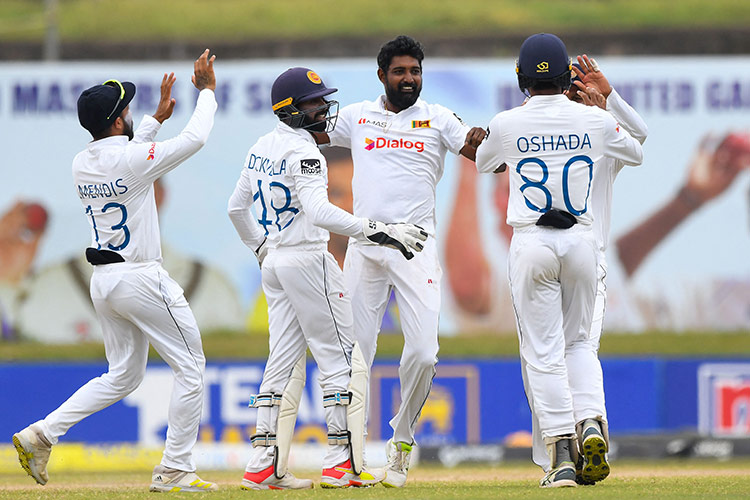 Prabath Jayasuriya (C) celebrates with teammates after taking the wicket of Usman Khawaja (not pictured). AFP

“We knew technically we didn’t have major issues, but mentally we had to get everyone (to) overcome the bitter experience in the first test,” Sri Lanka skipper Dimuth Karunaratne said. “I backed Prabath Jayasuriya because I play domestic cricket with him and I know how accurate he is with his bowling. That’s something that we lacked in the first test. Then Chandi played one of the best innings I have seen in recent years.”

Former captain Chandimal put Sri Lanka in a winning position with a remarkable counterattack. Chandimal resumed the day on 118 and became the first Sri Lankan to post a double century against Australia. He batted for more than nine hours and faced 326 deliveries, hitting 16 fours and five sixes. 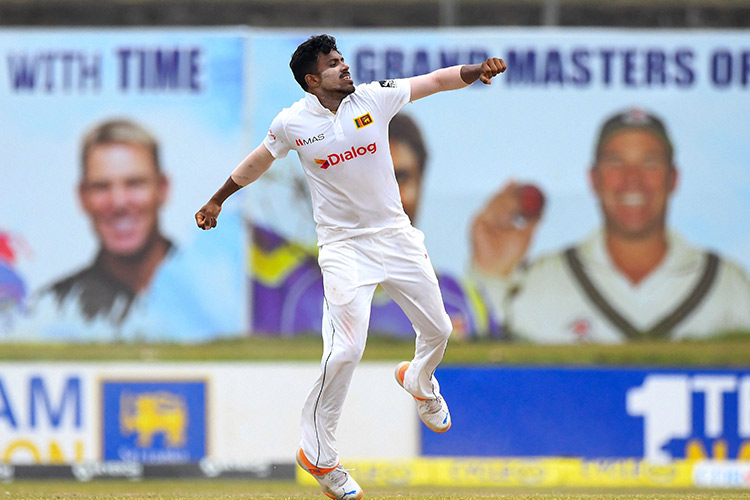 Maheesh Theekshana celebrates after taking the wicket of Pat Cummins (not pictured). AFP

When Sri Lanka’s ninth wicket fell, Chandimal was on 159 and it didn’t look like he would get to 200 but he took the Aussies by surprise by striking the ball cleanly and sending it out of the ground on three occasions.

Two consecutive sixes off Mitchell Starc completed his double century and Chandimal was named player of the series.

Sri Lanka’s total of 554 improved on its previous high against Australia of 541-8 declared in Colombo in 1992.

Chandimal was involved in several partnerships that turned the game in Sri Lanka’s favor. The hosts’ lead was only 67 when the day began but the lower order ensured they batted only once on a pitch that was providing a lot of assistance for spin bowlers. 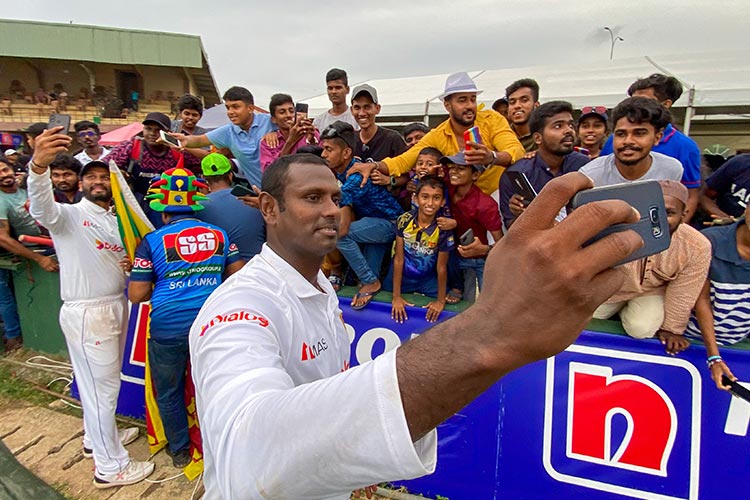 Chandimal smashed 48 runs off just 18 balls during that partnership and Australia simply had no answers.

“Dinesh batted really well, and once they got a decent size lead it was always going to be tough for us,” Australia captain Pat Cummins said. “Unfortunately, it started spinning, they bowled well tonight, and you can have those sessions where things move pretty quickly in the subcontinent and unfortunately we were on the wrong end of it.

“We missed an opportunity to score big in the first innings,” Cummins added. “The way we set up the game day one, (we were) hoping to get 400 plus, which history suggests here puts you in a really good position. Unfortunately, none of us hung around with (Steve) Smithy long enough to get up to the 400 plus.”

Down by 190 runs on the first innings, the Australia openers did well to add 49 runs before Ramesh Mendis broke through by dismissing David Warner on 24.

Jayasuriya then ran through the middle order, bowling with impeccable control and perfect lengths. He took out Usman Khawaja and trapped Smith for a duck in the same over. 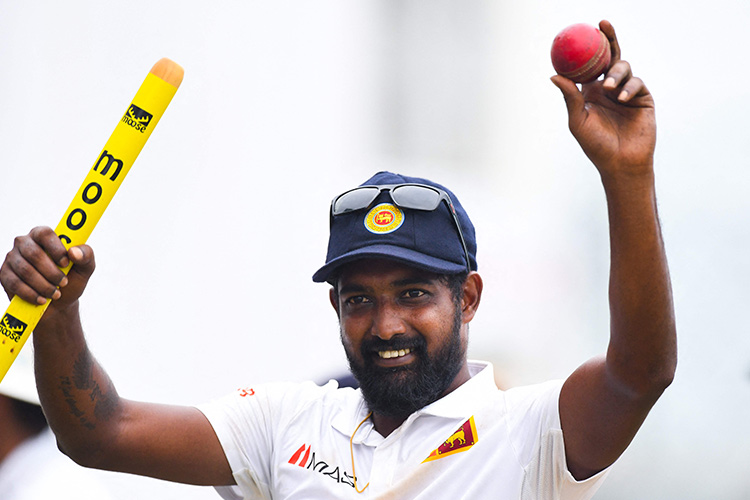 Travis Head was bowled by Ramesh Mendis, Marnus Labuschagne was lbw to Jayasuriya and Australia was 112-5. Two overs later, Cameron Green was stumped and Mitchell Starc edged to the slips in the same Jayasuriva over.

Theekshana got Cummins and Nathan Lyon in one over, despite the Australians reviewing both, and Jayasuriya finished the match in style by knocking over Mitchell Swepson’s off stump.