Steve Smith bats on the fourth day of the third Test match at the Gaddafi Stadium in Lahore on Thursday. AFP

Australian Steve Smith became the fastest batsman to complete 8,000 Test runs during the fourth day of the third and deciding match against Pakistan in Lahore on Thursday.

The 32-year-old drove pacer Hasan Ali to cover boundary to reach the milestone in the 151st innings of his 85th Test.

He beat Sri Lankan great Kumar Sangakkara’s record of doing it in his 152nd innings, achieved against India in Colombo 12 years ago. 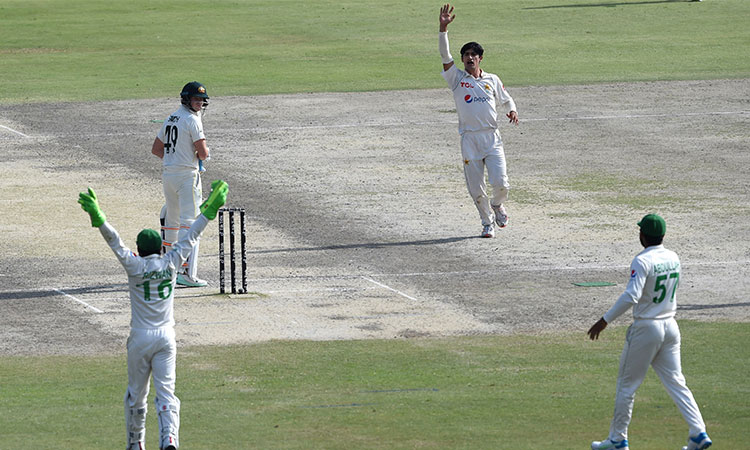 Naseem Shah (top R) celebrates after taking the wicket of Steve Smith (top L) during the fourth day of the third  Test. AFP

Smith is the 33rd batsman in the world and seventh from Australia to score 8,000-plus runs.

Smith started his career as a leg-break bowler, making his debut against Pakistan in Australia’s neutral-venue series at Lord’s in London in 2010.

Over the years he has become one of Australia’s greatest batters with 27 hundreds at an impressive average of 60.10.