Rishabh Pant (L) applauds as batting partner Virat Kohli raises his bat to celebrate scoring a century during the T20 match of Asia Cup in Dubai on Thursday. AP

Swashbuckling batsman Virat Kohli smacked his maiden T20I century to end the jinx as India routed a hapless Afghanistan by 101 runs in their Asia Cup match in Dubai on Thursday.

Kohli ended his century drought of 1,020 days in the international matches with the career-best an unbeaten 122 off 61 balls, propelling India to 212.

After posting a huge total, India restricted Afghanistan to 111/8 as Bhuvneshwar Kumar returned with a career-best figure of 5-4.

Kohli has joined former Australian captain Ricky Ponting, who also has 71 centuries to his name in international cricket, while India’s batting maestro Sachin Tendulkar leads the tally with a whopping ton of tons. Kohli had been going through a lean patch which costed him his captaincy in all formats. The flamboyant batsman also smashed his first century in T20Is, bettering his previous best of 94 in the T20I. 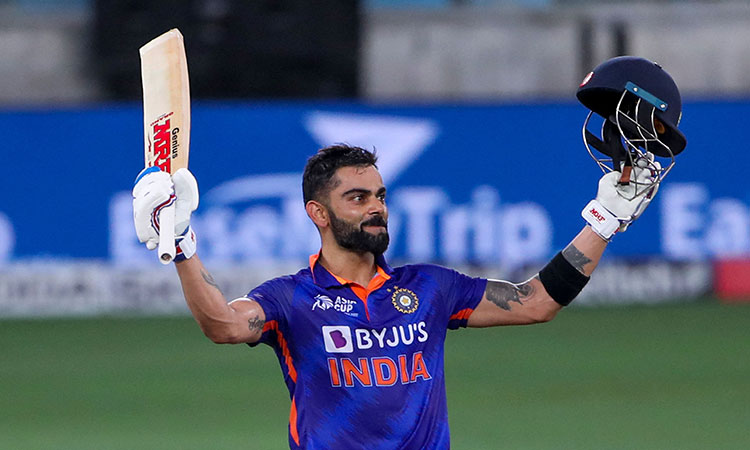 Kohli opened the innings with the stand-in captain KL Rahul in the absence of Rohit Sharma. Both the players were cautious in the beginning as first two overs went boundary-less.

They knuckled down and shared a 119-run partnership for the first wicket to lay down a strong foundation for a big total. Rahul, who was completely overshadowed by Kohli, scored a 41-ball 62.

Kohli, who reached his fifty off 32 balls, accelerated his innings phenomenally. After reaching his fifty, he changed his gears. The swashbuckling right-handed batsmen pulled Fareed Ahmed for a six to bring up his century in style. His last 72 runs came off just 29 balls. His innings was peppered with 12 boundaries and six hits over the fence.

Once he started cutting loose, there was no stopping for him. He made a light work of Afghanistan attack. It did not look like it was the same attack, which made Pakistan toil hard to chase a paltry total of 129, the other day in Sharjah.

India scored 78 runs in the last five years as Kohli pressed the accelerator in the 16th over. He collected 11 runs off Rashid Khan. In the next over, he plundered another 15 runs off Farooqi with the help of three fours.

Every over kept on yielding more runs than the previous one as the master showed the world why he remains a dangerous customer even being out of form for three long years.

He was at his brutal best and he decimated the Afghanistan bowling single-handedly. He played almost every shot in the book of cricket hook, pulls, drives and sweeps to get to his hundred. Kohli poured his heart out and dedicated his century to his actress wife Anushka Sharma.

“I have learnt a lot in the last two-and-a-half years. I am turning 34 soon and the angry celebrations are a thing of past now,” said Kohli in an interview after the soon after innings.

“I am feeling blessed as I did not expect a century to come in this format that too so soon. I want to dedicate this century to my wife Anushka, who stood by me in all the thick and thins of life.

“She helped me in getting those mental blocks clear. She always encouraged me. When I came back in the team they also helped me a lot. They gave me the space to work on my batting. Time away from the game helped me a lot,” added Kohli.

Kohli had taken month-long break from cricket to put his faltering career back on the track.

Meanwhile, Afghanistan were never in the chase as they got off to a disastrous start, as Bhuvneshwar ripped through their batting line-up. They lost both the openers with just one run on the board.

Bhuvneshwar trapped Hazaratullah Zazai for a duck and rattled the stumps of Rahmanullah Gurbaz for a golden duck to push Afghanistan on the back foot.

Then he got rid of Karim Janat, Najibullah Zadran and Azmatullah Omarzai in quick succession to reduce them to 21/6. Ibrahim Zadran waged the battled single handedly as he scored a gritty fifty to tale the score past 100.