Iga Swiatek celebrates with the trophy after winning the single’s final match against Aryna Sabalenka (not in the picture) in Stuttgart, Germany, on Sunday. AFP

World number one Iga Swiatek won her fourth consecutive WTA title this year as she swept aside Aryna Sabalenka in straight sets to claim the Stuttgart final on Sunday.

The 20-year-old picked up her 23rd straight victory as she added Stuttgart to title wins in Doha, Indian Wells and Miami.

Swiatek was relentless, breaking Sabalenka’s serve twice in the opening set, then greeting every point won with a clenched fist of celebration to seal a 6-2, 6-2 win.

“It was a tough match, we fought for every game, hopefully there will be many more to come,” said Swiatek.

She thanked her team for helping her recover in the short time between her semi-final win over Liudmila Samsonova, which lasted just over three hours.

“Thank you for giving me life again,” she said. “The atmosphere was amazing and it was great to see all the Polish flags, it’s such a huge support for us.” 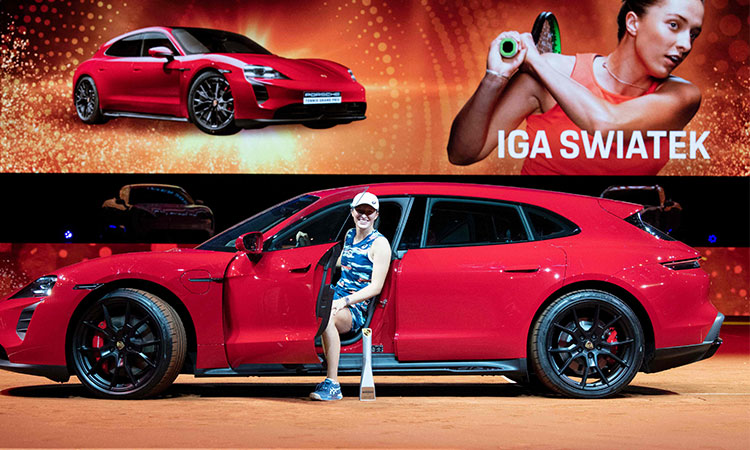 Iga Swiatek celebrates with the trophy and the winner’s car after winning the single’s final match against Aryna Sabalenka in Stuttgart, Germany. AFP

Swiatek threw her racquet in the air with joy and held up four fingers for each of her titles in 2022 after breaking Sabalenka’s serve in the final game to convert her third championship point.

Her debut at the clay-court Stuttgart tournament culminated with a commanding performance as she needed just 85 minutes to dispatch Sabalenka, ranked fourth in the world.

Swiatek was the first Polish player to win a Grand Slam singles title at the 2020 French Open.

Her tally of 23 straight victories sees Swiatek match Naomi Osaka’s winning streak from 2020-21 as she approaches Venus William’s record of 35 triumphs on the WTA tour.

Since losing her first WTA final as a 17-year-old in 2019, Swiatek has since won seven finals in a row.

She is also the first player to chalk up 30 match wins this season.