Joseph Blatter waves to the press in front of the Swiss Federal Criminal Court in Bellinzona, Switzerland, on Friday. AP

Former FIFA president Sepp Blatter and France footballing legend Michel Platini were both cleared of corruption charges by a Swiss court on Friday after a seven-year investigation during which they were booted out of the sport.

A judge said the pair’s account of a ‘gentlemen’s agreement’ for FIFA to pay Platini 2 million Swiss francs ($2.05 million) for consulting work was credible, and serious doubts existed about the prosecution’s allegation it was a fraudulent payment.

As a result Blatter, who led FIFA for 17 years, was cleared of fraud by the Federal Criminal Court in the southern city of Bellinzona. Platini, a former France national team captain and manager, was also acquitted of fraud.

The two, once among the most powerful figures in global soccer, had denied the charges against them. Swiss federal prosecutors said they would examine the written verdict before deciding whether to appeal. 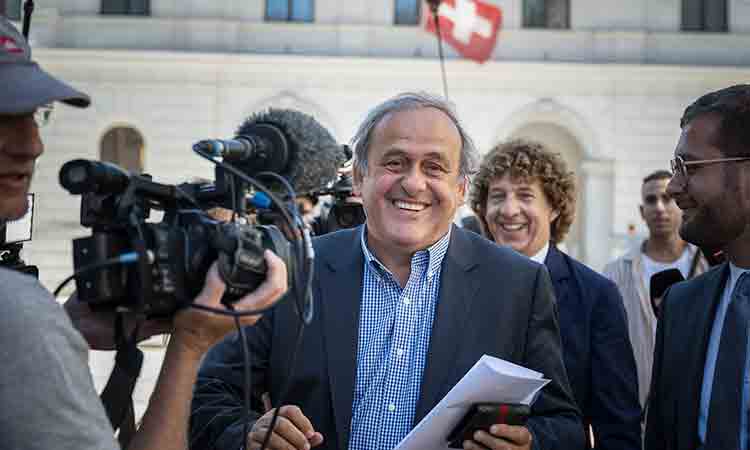 “I have always said my conscience is clear,” a relieved but frail-looking Blatter told reporters outside the court. “Naturally nobody’s perfect, but in the case of my job, my work, 44 years working at FIFA, for me it is so important that this case has been settled at the highest Swiss level,” the 86-year-old added.

Platini, aged 67, also described his joy, saying the allegations had turned him from a legend of world soccer to a “devil.” “I want to express my happiness for all my loved ones that justice has finally been done after seven years of lies and manipulation,” Platini said. “The truth has come to light,” he added. “I kept saying it: my fight is a fight against injustice.”

Prosecutors had accused Swiss national Blatter and Platini of unlawfully arranging for FIFA to pay the Frenchman two million Swiss francs ($2.06 million) in 2011.

The case meant Blatter ended his reign as FIFA president in disgrace and it wrecked Platini’s hopes of succeeding him after he was banned from football when the affair came to light.

Blatter had said the two-million franc payment followed a “gentlemen’s agreement” between the pair when he asked Platini to be his technical adviser in 1998.

Platini, worked as a consultant between 1998 and 2002 with an annual salary of 300,000 Swiss francs — with the salary being topped up to 1 million per year later.

The senior judge, Josephine Contu Albrizio, said a verbal agreement between Blatter and Platini seemed credible, as did the Frenchman’s seeing his market value at 1 million per year due to his status in the game.

It also seemed implausible that Platini would have worked only on the basis of written contract that paid him such a paltry sum, the judge told the court.

It was also credible that Platini sought the extra pay only in 2010 as he did not need the money immediately, she said.

The payment emerged following a huge investigation launched by the U.S. Department of Justice into bribery, fraud and money-laundering at FIFA in 2015, which triggered Blatter’s resignation.

Both officials were banned in 2015 from soccer for eight years over the payment, although their bans were later reduced. .

Platini, who also lost his job as UEFA president following the ban, said the affair was a deliberate attempt to thwart his attempt to become FIFA president in 2015.

Neither Blatter nor Platini wished to comment on Infantino, although Blatter said he could still attend this year’s World Cup tournament which FIFA controversially awarded to Qatar.