With an aim to evaluate trainers and the performance of the athletes, the Sharjah Women’s Sports Foundation (SWSF) will host Norwegian shooting ace Anna Gareth Jepsen from May 18 to May 24.

The Sharjah Women’s Sports Foundation, headed by Her Highness Sheikha Jawaher Bint Mohammed Al Qasimi, wife of His Highness the Ruler of Sharjah and Chairperson of the SWSF, lays stress on enabling female athletes in all sports disciplines to improve their skills and knowledge, as well as learn about the methods and mechanisms used in modern training science, in order to achieve the foundation’s vision of preparing generations of athletes capable of representing their clubs and country in the desired manner.

As she previously supervised the shooting teams of Norway, Denmark, and Finland in the Olympic Games and various world championships, the Norwegian coach has a strong resume during her sporting career in training athletes, in which she combined practical and sports experience and authored many references in training. 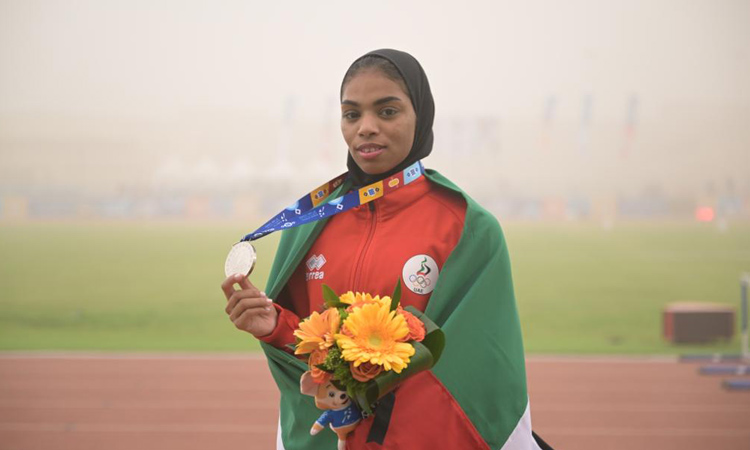 Latifa Al Kaabi celebrates after winning a silver medal in the long jump competition at the Gulf Sports Games in Kuwait.

Suhaila Imam Al Din, director of the shooting team, pointed out that such initiatives allow technical teams and players to keep up with the latest developments in the science of training in the sport of shooting, which is something the Sharjah Women’s Sports Foundation is passionate about, as it allows them to have the best experiences in various games thanks to Her Highness Sheikha Jawaher’s generous care, which motivates everyone in the work system to develop themselves and get benefits from the presence of the best coaches and experts in the world, who are known for their efficiency in the world of training and sports in general.

Meanwhile, in another achievement, the players of Sharjah Women’s Sports Club, taking part in the colours of the UAE National team, bagged one silver and two bronze medals at Gulf Sports Games in Kuwait.

The third medal for the country was won by Latifa Al Kaabi, who claimed a silver medal in the long jump competition with a distance of 5.34 metres.

Despite the adverse weather conditions that witnessed a strong sandstorm during the competitions that obliterated the players’ vision for the majority of the time, the players made the achievements in the tournament that put the UAE in the medals tally.

Latifa Al Kaabi expressed her delight at winning silver in the long jump competition, citing the strength of the jumpers from various participating countries and the convergence of performance in all six attempts designated for the competition, while also emphasizing that the UAE still has the opportunity to win another medal by competing in the triple jump or relay.

Fatima Al Balushi, a sprinter, also emphasized the 400-meter race’s strength and the gold and silver medals won by Bahraini runners in close times, stressing the importance of psychological and mental factors and focus prior to competitions in achieving the best results and achieving the desired goal of participation.

WORKSPACE offers splendor in the world of office furniture