PM Modi took to twitter and wrote, “Glad to have met boxers @nikhat_zareen, @BoxerMoun and Parveen Hooda who made India proud at the Women’s World Boxing Championship. We had excellent conversations on their life journeys including passion towards sports and life beyond it. Best wishes for their future endeavours.” The Telangana government on Wednesday announced a cash prize of Rs2 crore each to Nikhat Zareen for winning gold medal at World Boxing Championship and shooter Esha Singh for her superb performance at the recent ISSF Junior World Cup, according to IANS.

Chief Minister K. Chandrasekhar Rao decided to honour the woman boxer and shooter for emerging as winners in the international events recently and thus bringing laurels to Telangana. 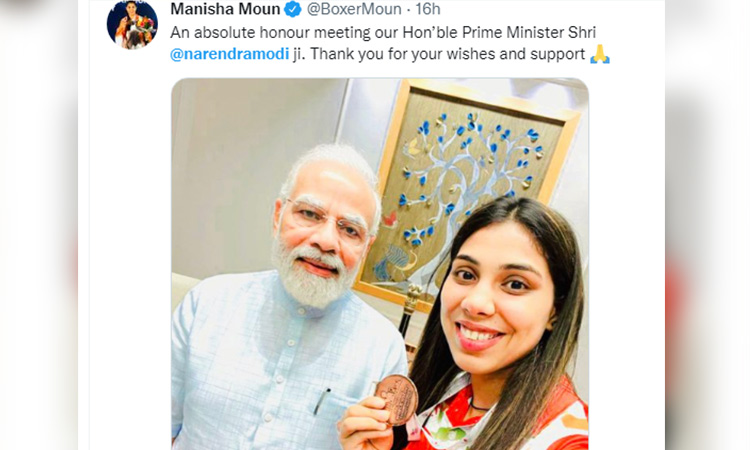 On the instructions of the Chief Minister, the government issued orders in this regard.

Apart from cash prize, the government also decided to allot residential plots to the two sports persons at Banjara Hills or Jubilee Hills in Hyderabad.

Zareen, who hails from Nizamabad district, became the fifth Indian woman boxer to win a gold medal at world championship.

On May 19, she defeated Thailand’s Jitpong Jutamas in the 52-kg category to join the selected club of Indian women boxers.

On the request of Mogulaiah, the government has taken a decision to allot a residential plot in B.N. Reddy Nagar colony, said the Chief Minister’s Office.