Roger Federer plays a shot during a match. File

Roger Federer said he will donate $500,000 to aid children affected by the war in Ukraine, while the United States Tennis Association (USTA) said it would donate a percentage of ticket revenue from their Billie Jean King Cup tie against Ukraine to a relief fund.

The UN Refugee Agency (UNHCR) said earlier this week that nearly 3 million refugees have fled Ukraine, about 7% of the country’s population, since Russia’s invasion began on Feb. 24.

“My family and I are horrified seeing pictures from Ukraine and heartbroken for the innocent people who have been so terribly affected. We stand for peace,” Federer said on Twitter.

“We will provide assistance to children from Ukraine who need care, about 6 million Ukrainian children are currently out of school and we know it’s a very critical time to provide access to education and would like to support them to deal with this extremely traumatic experience. 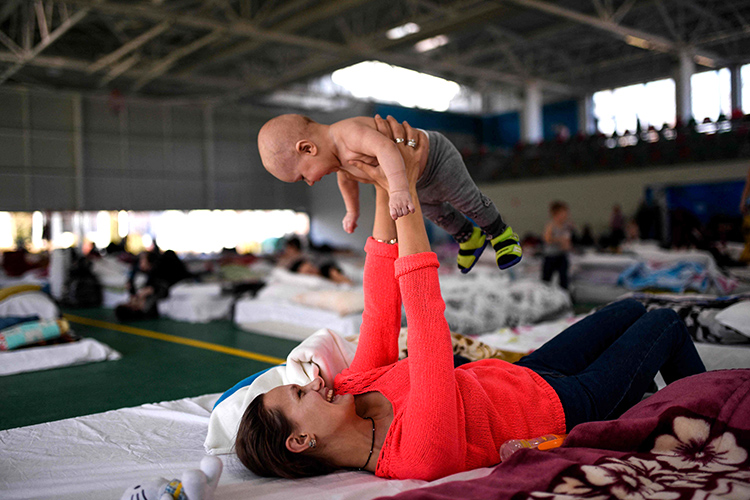 A woman plays with her son at a refugee camp in Poland. File

“Through the Roger Federer Foundation we will be supporting War Child Holland with a donation of $500,000 to establish access to continued schooling for Ukrainian children.”

Federer, 40, has not played since Wimbledon last year after undergoing knee surgery.

The 20-times Grand Slam winner had been looking to make his return for the grasscourt swing this year but his coach Severin Luthi said earlier this month that a return at Wimbledon may be unlikely as the Swiss was still in the rehabilitation phase.

Andy Murray, another former world number one and an ambassador for UNICEF UK, said last week that he would donate his prize money won from tennis tournaments in 2022 towards aid efforts for children affected by Russia’s invasion of Ukraine.

The USTA said it will be donating 10% of ticket revenue from the best-of-five qualifier against Ukraine to a crisis relief fund, adding that local sponsors will also make donations.

“We’re committed to welcoming the Ukrainian team and to making sure they have all the support they need leading up to and during the competition,” USTA chief executive Stacey Allaster said.

“Together, we will use this event to continue advocating for peace, along with providing aid and support for the people of Ukraine.” The tie will be held on April 15-16, on an indoor hard court venue in Asheville, North Carolina.