The thrilling last-four clashes set the tone for a pulsating final of the DP World Padel Championships 2022.

The finals of both the men and women’s competitions of the World Padel Championships will take place at the Dubai Duty Free Tennis Stadium on Saturday.

Held under the patronage of Sheikh Hamdan Bin Mohammed Bin Rashid Al Maktoum, Crown Prince of Dubai and Chairman of the Executive Council, the International Padel Federation’s flagship team event is hosted by the UAE Padel Association (UAEPA) in association with the Dubai Sports Council and the Dubai Department of Economy & Tourism (DET).

All the participating teams lavished huge praise on the excellent organization, facilities, venue, and warm welcome they received in Dubai, which is hosting the 16th edition of the World Championships — the first to be held in the Emirate. 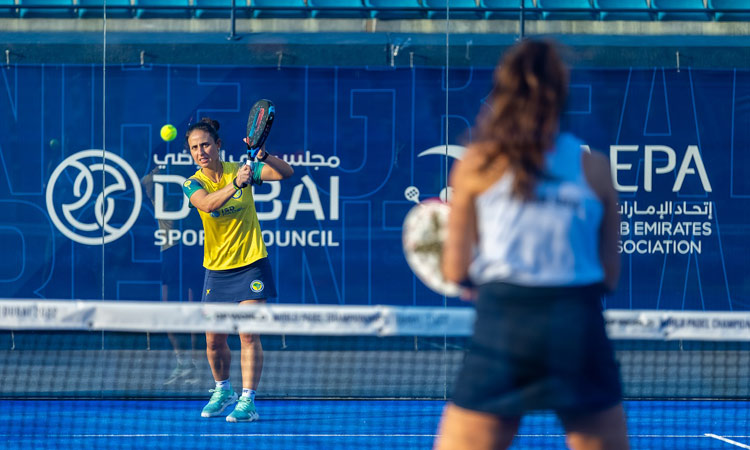 He also visited the different stalls and met with the staff of companies specializing in the production of padel sport equipment.

Sheikh Saeed also met with staff from Al Tadawi Medical Center, who are offering services to the participants in the championships.

The chairman of the organizing committee also visited the different courts of the stadium and met players, coaches, and representatives of top teams, who thanked the UAE and the UAE Padel Association for their hospitality and the tournament’s excellent organization, emphasizing that they would return to their home countries with the fondest memories of the UAE, a nation of security, safety, and happiness.

Sheikh Saeed expressed delight over the success of the championships and hailed the support and patronage of His Highness Sheikh Hamdan Bin Mohammed bin Rashid Al Maktoum, Crown Prince of Dubai and Chairman of the Executive Council of Dubai.

The world’s No. 1 ranked Spain routed Chile 2-0, while Argentina breezed past Paraguay 2-0.

Later, Alejandro Galan and Miguel Yanguas defeated Ignacio Lehyt and Javier Valdes 6-1, 6-2, as the defending champions confirmed their spot in the last four of the competition.

For a place in the final, Spain will square off against France, who battled past Belgium 2-1.

Making a strong start, Adrien Maigret and Benjamin Tison swept aside Maxime Deloyer and Laurent Montoisy 6-1, 6-2. Belgium’s Clement Geens and Jerome Peeters turned the tables in the second after winning the game 6-3, 6-2 against Jeremy Scatena and Bergeron Johan.

In a close third match, Bastien Blanque and Thomas Leygue wrapped up the match after two thrilling sets. The Belgians’ Jeremy Gala and Alec Witmeur had their chances in the tie-break of the first, where they were leading 5-1. In the second, the French pair fended off the challenge by winning the game 6-4.

Argentina, who are looking to reclaim the title they lost to Spain at last year’s World Padel Championships in Doha, dominated the quarter-final against Paraguay.

Argentina will next face Portugal, who reached the semi-finals after a stunning 2-1 win over Brazil.

Portugal made an incredible comeback in the match after losing the first set, thanks to brothers Miguel Deus and Nuno Deus. The Deus duo beat Francisco Gomes and Marcello Jardim 6-4, 4-6, 6-1.

Brazil were expected to win the decider with their major stars, Pablo Lima and Lucas Cunha, taking the court. They started well and won the first set 6-3 against Miguel Oliveira and Afonso Ramos. Bouncing back, Oliveira and Ramos won the second set 6-4 before winning the third 7-5 to dash the hopes of the Samba boys.

Belgium’s dramatic win over France was the big upset of the women’s tournament. The match ended 2-1, and in the deciding match, Elyne Boeykens and Dorien Cuypers won in three sets against the French Amelie Detriviere and Melissa Martin, 6-4, 5-7, 6-3.