India’s Rishabh Pant celebrates after reaching a century during the third one day match against England and India at Emirates Old Trafford cricket ground in Manchester on Sunday. AP

Rishabh Pant’s maiden one-day international century guided India to a five-wicket win over England at Old Trafford on Sunday to give the tourists a 2-1 series success against the 50-over world champions.

Pant made 125 not out, winning the game with a reverse-swept four off Joe Root as India finished on 261-5 after chasing down a target of 260 with 7.5 overs to spare.

Victory meant India had become just the third side to win an ODI series away to England since 2015, having already claimed the preceding Twenty20 series 2-1.

The 24-year-old Pant received excellent support in a partnership of 133 in 19 overs with all-rounder Hardik Pandya after India had been faltering at 72-4.

Hardik made 71 after taking career-best figures of 4-24 in England’s 259 all out built on captain Jos Buttler’s 60 on his Lancashire home ground.

“Hopefully I will remember this for the rest of my life,” said Pant at the presentation ceremony.

“You always aspire to play like this when your team is in trouble.”

India captain Rohit Sharma was buoyed by the form of his side ahead of October’s T20 World Cup in Australia.

“We came here and wanted to achieve something as a group in white-ball cricket and I thought that we achieved a fair bit,” he said.

“We want to create bench strength as injuries are bound to happen,” added Rohit. 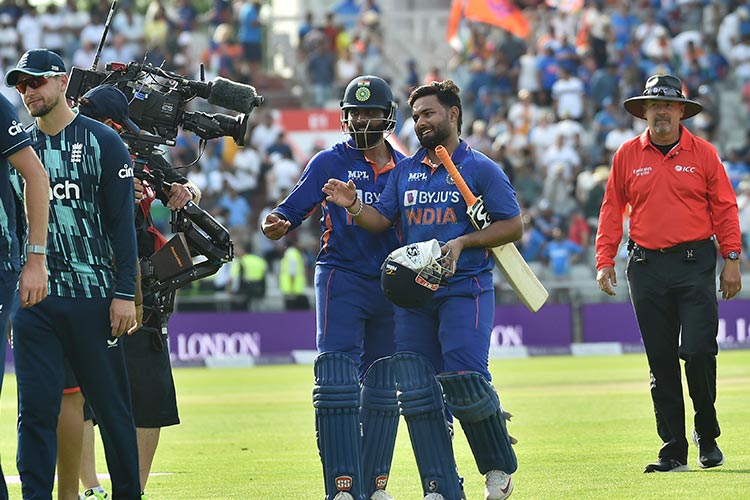 Rishabh Pant and Ravindra Jadeja leave the pitch at the end of play at Emirates Old Trafford cricket ground in Manchester on Sunday. Associated Press

Both Hardik and Pant benefitted from England errors early in their respective innings.

“If you give good players a chance they will hurt you and had we taken those chances we had a good hold with a long tail,” said Buttler.

And Hardik had made just six when he pulled Brydon Carse over the head of Craig Overton at fine leg after the fielder had carelessly walked in from the boundary edge.

Earlier, Reece Topley carried on from where he left off in England’s series-levelling 100-run win at Lord’s, where he took an England ODI best 6-24.

The 28-year-old left-arm quick removed the India top three of Shikhar Dhawan, Rohit Sharma and Virat Kohli in a superb opening spell of 3-15 in five overs.

Kohli’s exit, caught behind for 17, meant the star batsman had now gone 78 innings across all formats without an international hundred.

Hardik, though greeted Topley’s first ball back with a resounding straight drive for four before his 55-ball innings, featuring 10 boundaries, ended when he holed out off Brydon Carse.

But Pant went into the 90s by going down on one knee to hoist David Willey for six.

The dynamic batsman then completed a 106-ball century — remarkably his first in 27 matches at this level — including 10 fours and two sixes before winning the game to the delight of the massed ranks of India fans at Old Trafford.

Buttler’s 60 was his highest score since he succeeded the now retired Eoin Morgan as England’s white-ball skipper.

He shared stands of 75 and 49 with Moeen Ali and Liam Livingstone respectively, but just when it seemed England were about to cut loose, India pegged them back.

England started brightly after losing the toss, with Jason Roy hitting three overs in the first over of th match , from Mohammed Shami.

But Mohammed Siraj, recalled in place of the injured Jasprit Bumrah, out with back spasms in the only change by either side made following the second ODI, delivered a double-wicket maiden in the second over, dismissing both Jonny Bairstow and Root for ducks.

Roy and Stokes, England’s Test captain, shared an attractive stand of 54 in eight overs before they were each dismissed by Hardik.

Roy, having made 41, got into a tangle against a short ball and skyed a simple catch to Pant.

Stokes had advanced down the pitch several times during his 27 but Hardik out-thought him with a bouncer that cramped his rival all-rounder for room and led to a simple return catch.

Hardik struck twice in an over to remove the big-hitting Liam Livingstone and Buttler with the aid of fine catches in the deep by Ravindra Jadeja to leave England struggling at 199-7.

Recession lurking as US economy shrinks again in second quarter