Tunisia and Qatar became the first teams through to the semi-finals after a remarkable day of action at the inaugural FIFA Arab Cup on Friday.

Although the victors prevailed in very different ways, both profited from the big occasion bringing out the best in their big players. For Tunisia, that was Seifeddine Jaziri and Yousef Msakni – their in-form striker and talismanic captain – coming to the fore to provide the cutting edge in a tight 2-1 win over Oman.

The hosts, for their part, blew UAE away in a stunning first half in which Almoez Ali scored twice and earned a penalty, with Akram Afif adding his third and fourth assists of a sparkling tournament.

Felix Sanchez’s team now face a mouth-watering last-four meeting with either Morocco or Algeria, while second quarter-final – between Egypt and Jordan – will determine who progresses to face the on-song Eagles of Carthage. 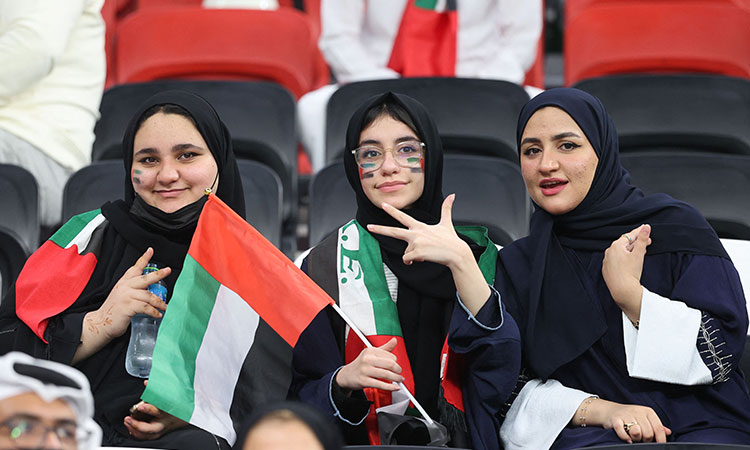 Fans attend the FIFA Arab Cup 2021 quarter final football match between Qatar and the UAE at the Al-Bayt Stadium. AFP

Oman were largely on the back foot against Tunisia, and managed just six efforts on goal to their opponents’ 16. But of all the efforts from both sides, the underdogs produced the best of the bunch: a 30-yard rocket from Arshad Al Alawi that hauled his team level in truly stunning fashion.

The celebrations that followed this certain goal of the tournament contender were to be shortlived, however. Just three more minutes had elapsed, in fact, before Tunisia’s lead was restored through Yousef Msakni’s close-range header, breaking hearts that had been sent soaring by Al Alawi’s moment of magic.

Tunisia didn’t merely dominate on the field; they were also on top in the stands, where their fans made up the bulk of the 21,329 Education City crowd. As the final minutes ticked down, with tension rising and Oman pushing for an equaliser, Mondher Kebaier decided to make full use of this numerical advantage.

Having turned to all four sides of the ground, waving his arms frantically in a plea for backing, the Tunisia coach would have thrilled at the response that followed. The noise levels immediately lifted but there was visual inspiration for his tiring players, too, as their supporters spent the entirety of stoppage time waving their phones, flashlights on, in an attractive, eye-catching show of support. 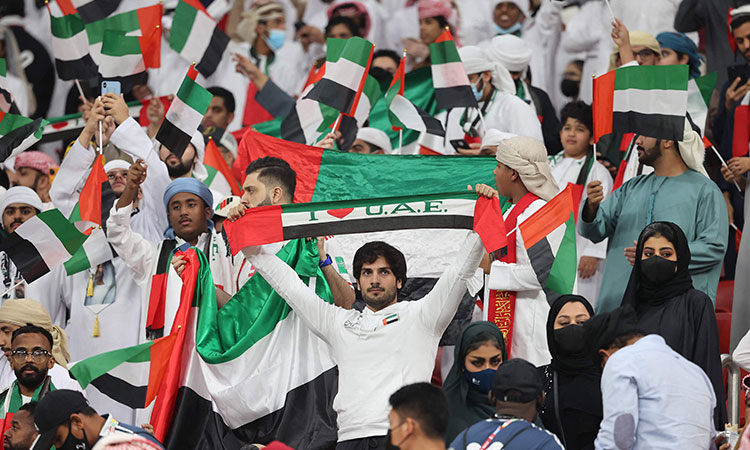 Fans react during the FIFA Arab Cup 2021 quarter final football match between Qatar and the UAE at the Al-Bayt Stadium. AFP

UAE don’t normally concede many goals and Akram Afif isn’t in the habit of mis-controlling the ball. This made the first half at Al Bayt, typified by the error-strewn nature of Qatar’s sixth-minute opener, all the more surprising. Mohanad Salem kicked off the catalogue of errors by tripping over the ball, allowing Almoez Ali to steal in and set up Afif seven yards from goal. And then, when Qatar’s nimble-footed No11 looked to have blown the opportunity with an uncharacteristically loose touch after beating the keeper, there was one final, costly mistake as Mohamad Alattas booted his attempted clearance against team-mate Ali Salmin. The ball duly ricocheted back into the Emirati net, setting the tone for a horrendous first-half for Bert van Marwijk’s usually defendable defence.

Qatar, of course, simply went from strength to strength, with each goal that followed seemingly more slick and impressive than the last.

UAE ended the group stage having enjoyed more possession than any other team, but with fewer goals (3) – by some distance – than any of their fellow quarter-finalists. That familiar theme played out again tonight, with the half-time statistics a powerful – and for the Emiratis, painful – reminder of how meaningless monopolising the ball can be.

UAE ended that opening 45 with a 73 per cent share in possession, yet hadn’t managed a single shot on target. Their efficient, clinical opponents, needless to say, had an altogether different story to tell, having used their more modest share of the ball to register six efforts on target – five of which flew into Ali Khaseif’s net.