Tadej Pogacar celebrates on the podium with the race’s “Sea Master Trophy,” on Sunday. AFP

Tadej Pogacar won the Tirreno-Adriatico seven-day cycling race on Sunday to notch up another triumph in a dominant start to the Slovenian’s season.

UAE Team Emirates leader Pogacar effectively retained the “Race of the Two Seas” run between the Mediterranean and the Adriatic when he romped away from his rivals during stage six on Saturday.

Pogacar, the 23-year-old two-time Tour de France champion, rolled across the line at San Benedetto del Tronto on Italy’s Adriatic coast with the main peloton on Sunday to seal what is already a third win of the campaign, after the UAE Tour and the Strade Bianche one-day classic two weeks ago.

“I enjoyed this stage but I was focussed until the end because you never know what happens… It’s not finished until you cross the line,” said Pogacar. “I’m super happy, any race we can win we’re happy. So far so good, we’ll see in the next races.”

Bauhaus took the sprint at the end of a 159-kilometre race after the peloton absorbed a three-man breakaway of Manuele Boaro, Alessandro Tonelli and Jorge Arcas. 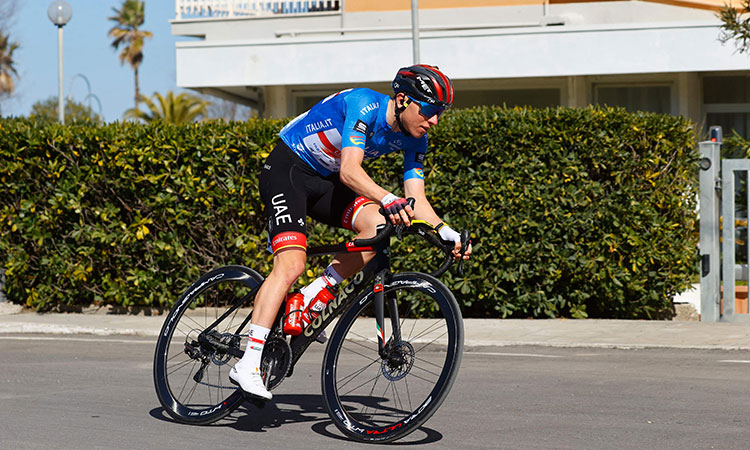 Tadej Pogacar rides during the 7th and last stage of the Tirreno-Adriatico cycling race. AFP

Tonelli was reeled in just before the race hit the final of five flat, 14.5km laps at the seaside finale while Boaro and Arcas finally gave up their effort heading into the last 8km.

That set up a thrilling finish as a huge group of riders tried to squeeze through a tight stretch of road.

“I feel amazing, We always believe I can win. I knew I’m in good shape and the team did really good today,” said the 27-year-old Bauhaus after a rare big win.

“We knew it’s a head wind, so the plan was to come late… I saw the gap on the right side and I just went for it.

“It’s a super big race, I said this morning to the guys that it would be really nice on my Palmares to have a win like this.”