Kuwait came in third place after beating Bahrain 2-1. Oman’s national team won the women’s title with an easy win over the UAE in the final.

The organising committee of the Nad Al Sheba Sports Tournament has added the Gulf Padel Cup — a GCC Men’s Team Championship — to this year’s event for the first time.

With this win, Fohood Zabeel’s team topped the standings in Group A with five points.

The Surprise are in second spot with four points. They could have matched Fohood Zabeel in the points table but lost against Bin Thani earlier, pushing them down.

The NAS Run, starting on Thursday, will feature races in different categories across two distances — 5km and 10km — and it is open to all men and women living in the UAE, of any nationality or ability.

On Saturday, April 16, the Spartan Nas Night Sprint returns to the NAS sports complex, where in a 5km solo night run, the participants will face 20 hardcore obstacles. 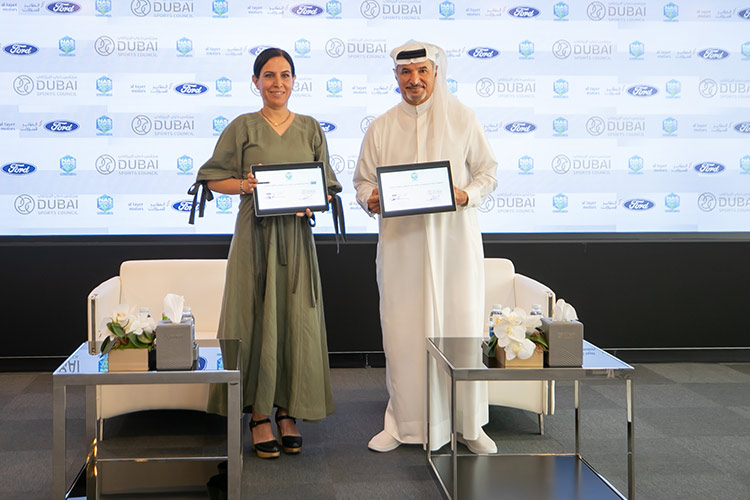 Saeed Hareb and Mona Hassan Sadoun pose for a picture after signing the agreement.

Meanwhile, Al Tayer Motors, one of the main sponsors of the tournament, is offering four Ford cars to the fans.

Al Tayer Motors, continuing its partnership in the ninth season of the Nas Al Sheba Sports Tournament, presented the latest cars to be distributed as free prizes through open raffles to the audience.

Hareb affirmed his pride in the continued presence of Al Tayer Motors as the main sponsor of the tournament since its inception, which bodes well with the tournament’s position and the company’s keenness to support sports and healthy lifestyles while rewarding NAS’s loyal audience and families who keep the enthusiasm of players high with encouragement and motivation.

Dubai Police, Roads and Transport Authority of Dubai, Dubai Municipality and Dubai Corporation for Ambulance Services are the strategic partners for this year’s Nad Al Sheba Sports Tournament, while Tadawi Medical Center, Emirates Foundation (Takatof), Dubai Duty Free, Pocari Sweat, Palazzo Versace Hotel Dubai and TecnoTree have signed up as sponsors for the ninth season of the event, which is one of the biggest events of its kind in terms of participation and prize money.