The National Basketball Association (NBA) and the Department of Culture and Tourism – Abu Dhabi (DCT Abu Dhabi) on Tuesday announced that the Atlanta Hawks and the 2021 NBA champions Milwaukee Bucks will play two pre-season games in October.

The two games will take place at Etihad Arena on Yas Island in Abu Dhabi on Thursday, Oct. 6 and Saturday, Oct. 8, 2022 — marking the NBA’s first games in the UAE and Arabian Gulf.

The two teams met in the 2021 Eastern Conference Finals, with the Bucks going on to win their first NBA championship in 50 years.

The NBA Abu Dhabi Games 2022 are part of a groundbreaking multiyear partnership between the NBA and DCT Abu Dhabi that earlier this year saw the launch of the first Jr. NBA Abu Dhabi League, a youth basketball league for 450 boys and girls ages 11-14 from local schools across Abu Dhabi.

The partnership also sees DCT Abu Dhabi, under “Visit Abu Dhabi,” the tourism promotion initiative of the UAE’s capital city, serve as the Official Tourism Destination Partner of the NBA in the Middle East, North Africa, Europe and China.

China mulls training camps in Dubai ahead of Paris Games 2024

More than 220 male and female prospects from the Middle East – including five players from the UAE – have participated in Basketball Without Borders (BWB) or NBA Academy, the league’s elite basketball development programmes for top prospects from outside the US since 2019, more than 500 boys and girls have also participated in the NBA Basketball School Dubai (UAE), a year-round, tuition-based basketball development programme for boys and girls ages 6-18.

Outside of North America, the NBA has a long history of hosting pre-season and regular season games.

Ralph Rivera, Director NBA Europe and Middle East Managing Director, said: “We want to make a great first impression and bringing the best of the best is the way to do that.

“Bringing the Atlanta Hawks and the Milwaukee Bucks to Abu Dhabi in October is an important milestone in the NBA and basketball’s global growth.

“In addition to the games, we look forward to engaging fans through a variety of interactive events and giving back to the local community through NBA Cares initiatives and youth development clinics that will teach the sport and its values to young boys and girls,” he added.

The Bucks-Hawks exhibitions, billed as The NBA Abu Dhabi Games 2022. 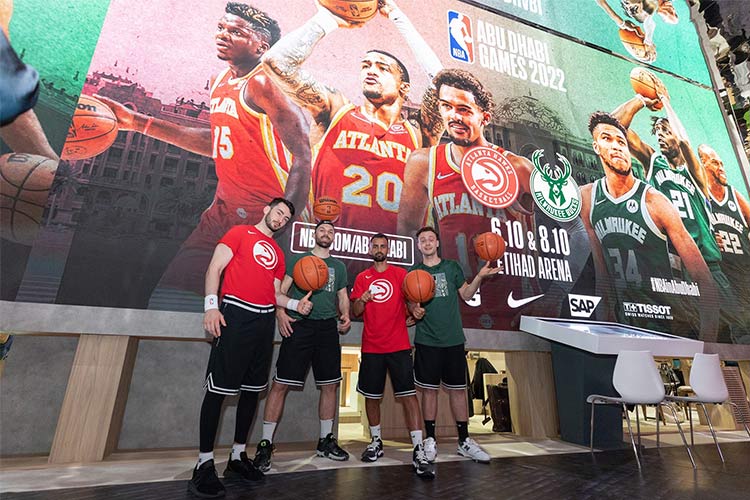 Free style performers put on a show during the press conference for the NBA Abu Dhabi Games 2022.

In November, NBA deputy commissioner Mark Tatum traveled to Abu Dhabi to finalize a multiyear agreement between the league and DCT Abu Dhabi.

Saleh Mohamed Al Geziry, DCT Abu Dhabi Director General, said: “We are thrilled to be hosting the first NBA games in Abu Dhabi, the first to be hosted in the UAE and the Arabian Gulf, and look forward to welcoming the Atlanta Hawks, the Milwaukee Bucks and basketball fans from across the world to discover this incredible city and experience our authentic Emirati culture for themselves.

“Basketball has the ability to unite communities, and the spirit of the game will be felt by players and visitors, both on and off the court. The unveiling of the NBA teams marks an important milestone in our wider partnership with this world-class sports organisation.”

Steve Koonin, CEO Atlanta Hawks, said: “The NBA continues to do an amazing job of growing the game internationally, and we are thrilled to have the opportunity to participate in the first NBA Abu Dhabi Games.

“As we look toward the future of the Hawks brand, being recognized as a premier NBA franchise globally is something we aspire to, and we believe the experience for our players and staff to take in the culture in Abu Dhabi will be both incredibly memorable and impactful.”

Peter Feigin, Milwaukee Bucks and Fiserv Forum President, said: “We are honoured to have been selected to participate in the NBA’s first games in the UAE.

“As the NBA continues to expand globally, we look forward to visiting Abu Dhabi and furthering the league’s goals of inspiring people through basketball.  We will be proud to represent our city, our state and Bucks fans worldwide this October.”