Robert Lewandowski poses with his wife Anna as they arrive for the Globe Soccer Awards. Reuters

French player Kylian Mbappe of the Paris Saint Germain bagged the Best Player of the Year honours at the Globe Soccer Awards in Dubai on Monday.
Mbappe along with Lionel Messi and Neymar makes a deadly combination at the PSG, who are the current champions of the French League and a force to reckon with in European football.

He is one of the best players in the world and known for his speed and dribbling. He has won three French League titles, three League Cups with PSG and was named French League’s Player of the Year twice.

He has finished as league’s top scorer for three consecutive seasons. He is also the third-highest goal-scorer in the club’s history. He smashed a total of 42 goals in 47 appearances across all the tournaments for his club in the 2020-2021 season. The French forward also played a key role in France’s victory in the 2018 World Cup in Russia in 2018.

Here are the highlighted individual achievements: 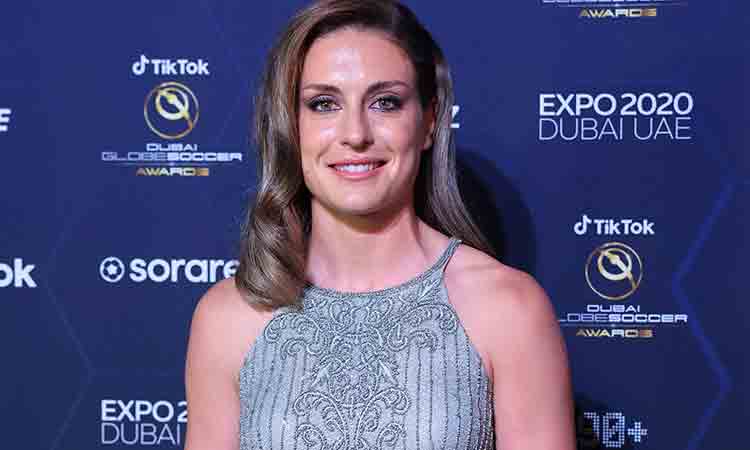 Spain’s Alexia Putellas poses for a photograph at the Globe Soccer Awards. Reuters

— Spanish midfielder Alexia Putellas wins Globe Soccer’s award for Best Women’s Player of the Year for 2021. Putellas has played for Barcelona since 2012, a prodigious goal scorer, holds the record of 93 caps for Spain in the women’s game.

Bayern Munich striker Robert Lewandowski added one more feather to his cap as the Polish star was named as the Globe Soccer’s Maradona Award for his exploits both with his club and the national team.

He was given the honours for his amazing feat of scoring 64 goals and 10 assists in the year 2021. Lewandowski has been instrumental in Bayern’s domination of the German League. He also played a vital role in Poland’s qualification for the 2022 FIFA football World Cup.

Cristiano Ronaldo bagged the honours for being the top Goal Scorer of All Time. He has been the winner of the multiple Best Player titles at the Globe Soccer.
Ronaldo has scored the most goals in history, taking his tally to a whopping 802. He is 44 ahead of compatriot Lionel Messi, who has smashed 748 goals across all competitions. Messi is four places adrift of Ronaldo in the list of the all time top goal scorers.

Ronaldo broke the record of Iran’s Ali Daie to claim the top spot in the list of the players who have scored most goals on the international stage for their respective countries. He has 115 international goals to his name in 184 appearances. Leonardo Bonucci of Juventus won the Best Defender of the Year honours while Gianluigi Donnarumma got the Best Goalkeeper of the Year title.

Italy were crowned as the Best International Team of the Year. They had defeated England in the final of the UEFA of the Euro Championship 3-2 via penalties after the game got over 1-1 in the regular time.

Italy manager Roberto Mancini was conferred the Best Coach of the Year Award for guiding his team to UEFA Euro glory. Mancini is one of the most revered figures in the European football and regarded as one of the best football coaches of the world.

He has an impressive portfolio of having managed the best teams of Europe, which features the name of clubs like Manchester City, Inter Milan and Lazio to name a few. Barcelona’s Alexia Putellas became the first woman player to win the Woman Player of the Year Award. Putellas plays for Spain national team and is the captain of the Barcelona eves team.

She is regarded as one of the best players on the women circuit. Putellas has played for Barcelona since 2012. Since joining Barcelona, she has won five league titles, six Copa de la Reina, and one UEFA Women’s Champions League title. In Barcelona’s 2020-21 season, she played an essential role as her team won the UEFA Women’s Champions League as well as a continental treble, both for the first time in their history. Putellas later went on to win the UEFA Women’s Player of the Year Award and the Ballon d’Or in 2021.

The Italian League, which is one of the major leagues of Europe, won the Innovation Award for embracing the technology and leading the way with their innovation in the game.

Seria A were the first league in the world to introduce Video Assistant Technology technology (VAR). They are leading innovators in ways that will enhance the sport and benefit their fans: this includes an NFT collection built for Serie A, the Italian Cup and the Italian Super Cup.

Barcelona’s female team bagged the Best Woman Team of the Year for their achievements in the year 2021. Barca Eves are Spain’s most successful women’s club both domestically and in Europe.

The event reflects the UAE’s and Dubai’s leadership in advancing excellence in the global sporting sector.

Sheikh Mansoor also stressed on the UAE’s contributions to shaping the future of various sporting fields.

Kipchumba, Kosgei and Kiplimo among stellar line-up for Ras Al Khaimah Half Marathon