Iranian fans celebrate their football team’s win against Wales during the Qatar 2022 World Cup in Doha on Friday. AP / Reuters

Iran coach Carlos Queiroz said his players were “back to football” after their last-gasp 2-0 victory over Wales at the World Cup on Friday.

The Iranian players opted to sing their national anthem, after choosing not to before their opening game against England in an apparent show of solidarity with anti-government protestors.

Some of their fans were in tears at the Ahmad Bin Ali Stadium during the anthem. But there was unbridled joy after a stunning climax to the match when Rouzbeh Cheshmi and Ramin Rezaeian scored in the 98th and 101st minutes.

“I think it was a wonderful day for us, we’re back to football and I don’t have the words to say thank you to our players,” said Queiroz, leading Iran at a third straight World Cup. 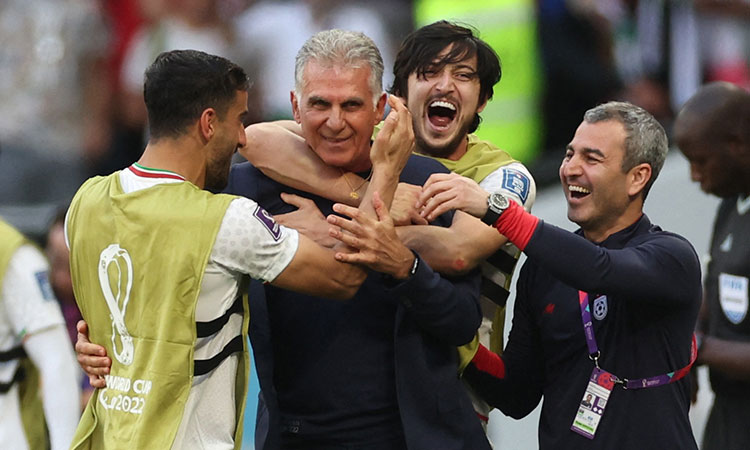 “They deserve all attention and respect. I think today people understand these boys love to play football. “Again the players deserve to be supported and we did it for them. That’s the only reason we are here, to play for the fans.”

Iran bounced back in style from a 6-2 hammering at the hands of England with an energetic display against Wales.

‘Team Melli’ will head into their last Group B match against the United States on Tuesday knowing that another win would send them into the knockout phase for the first time.

“It’s just the beginning, now we need to finish the job,” added Queiroz.