West Indies crushed England by 10 wickets in the third and final cricket test on Sunday to win the series 1-0. The hosts needed only 4.5 overs on Day 4 for their batters to reach the winning target in Grenada.

West Indies finished on 28-0 in the second innings after earlier dismissing England for 120. West Indies captain Kraigg Brathwaite was 20 not out and John Campbell undefeated on 6.

When England resumed on 103-8, it was already on the brink of defeat with a lead of only 10 runs with just two wickets in hand in its second innings.

The visitors lasted another 11 overs in the opening session with Kemar Roach (2-10 off 9.2 overs) taking both England wickets – Chris Woakes (19) and Jack Leach (4).

It took almost 45 minutes for West Indies to break up England’s ninth-wicket partnership, with a stunning reaction catch from Jason Holder doing the job.

Woakes middled Roach’s first ball as it went down the leg side and Holder flung out a hand and plucked the ball out of the air at leg gully. 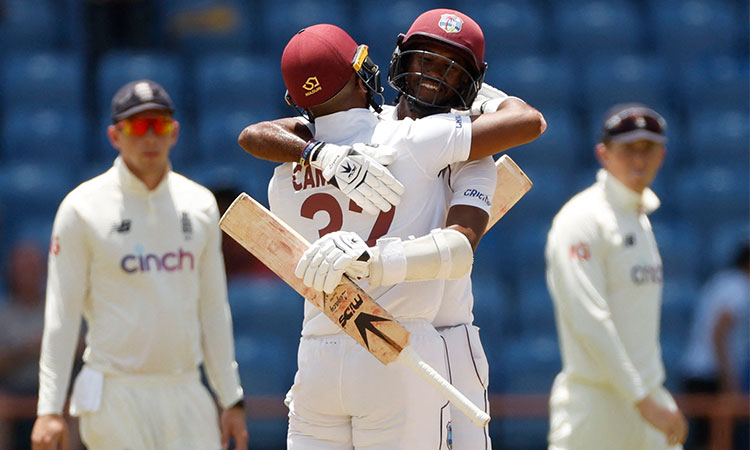 West Indies medium-pacer Kyle Mayers started the day with an incredible 5-9 from 13 overs, a maiden five-for, but went for five in his first over on Sunday and finished with 5-18 from 17 overs.

The batting allrounder was unwanted for the first two tests – both draws – and he replaced spinner Veerasammy Permaul with the aim of strengthening the batting.

The result means England’s failure to win a test series in the Caribbean in 18 years carries on.

It is likely to extend the debate over Joe Root’s suitability as captain, despite his superb batting form with two centuries in the series.

After England’s latest defeat, and a 4-0 Ashes humiliation in Australia, Root indicated he still wants to stay on as captain.

“I think I made it quite clear at the start of this game and throughout this tour I’m very passionate about trying to take this team forward,” Root told BT Sport.

“I will control what I can. I don’t think it’s ever in your hands. I feel like the group are very much behind me, we’re doing a lot of really good things and we just need to turn that into results now.”

West Indies enjoyed its first test series win at home since 2019. That was when England last visited.

West Indies had an intimidating 93-run lead on the first innings after making England bat. England scored 204 and 120, and West Indies 297 and 28-0.