A visitor takes a photo of a private collection at the Afghanistan Pavilion during the Dubai Expo 2020. Reuters

Afghan antique dealer Muhammad Umar Rahimi carried his most prized possessions to display at Expo 2020 Dubai hoping to portray his war-scarred homeland in a light different to that under Taliban rule.

Near a fast food outlet on the sprawling world fair site in the United Arab Emirates, with no sign to indicate the location of the Afghan Pavilion, Rahimi has on display 300 items – from daggers and carpets to saffron and deep-blue lapis lazuli stones.

“When the Afghan government collapsed, Expo organisers decided that this be turned into a people’s pavilion for the people of Afghanistan,” Rahimi, who has been living in Vienna for more than 40 years, told AFP. The 63-year-old said it was then that he took it upon himself to contact Expo and organise the pavilion, which was running the risk of not opening at all as the Taliban took control of Kabul in mid-August.

An Expo 2020 spokesperson said that in light of developments in Afghanistan the fair welcomed “the initiative of the Afghan business community to run the pavilion and share with the world the story of the people of Afghanistan”.

Far from the scenes of war and destruction, traditional robes, hand-woven rugs and lute-like rubabs decorate the pavilion at the fair that opened earlier this month.

“This exhibition is extremely important for Afghanistan,” said Rahimi. “There are a lot of Afghans who live here.”

With the help of two of his sons and his brother, all of whom live in Austria, Rahimi transported items from his personal collection at his own expense, according to the Independent. 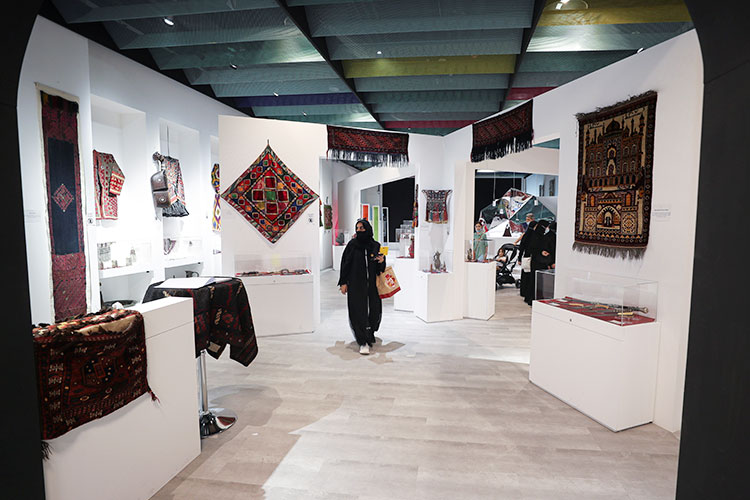 A visitor walks through a private collection of Afghan artifacts at the Afghanistan Pavilion during the Dubai Expo 2020 in Dubai.

The Afghan pavilion opened about a week after Dubai inaugurated the six-month Expo on October 1, with a delay of nearly a year due to the coronavirus pandemic. According to the Afghan consulate in Dubai, one of seven emirates that make up the UAE, the Gulf country is home to approximately 150,000 of its citizens. Many of them run successful businesses, while others work in shops, restaurants and construction.

On August 15, Taliban fighters took Kabul after a lightning offensive launched in May as the United States and NATO began the final stages of withdrawing their troops.

They are seeking diplomatic recognition as well as assistance to avoid a humanitarian disaster, having returned to power after two decades of war.

Rahimi did not want to comment on the political situation in Afghanistan but stressed the overwhelming desire for peace and for a safe, stable and prosperous homeland.

He said his participation in the Expo was to introduce people to his home country and what it can offer.

“It is so Afghanistan’s name is not forgotten, and people see our culture and fertile land,” Rahimi told AFP. “We want peace… and we have hope in the future of Afghanistan.”

Fawaz al-Shamri, who had stumbled upon the Afghan pavilion after visiting the nearby Saudi one, said that it was enlightening to learn more about the Afghan culture. “This is a chance to see what they offer,” said the Saudi citizen.

The main site of Expo 2020 Dubai is a 438-hectare area (1083 acres) located between the cities of Dubai and Abu Dhabi, near Dubai’s southern border with Abu Dhabi. The master plan, designed by the American firm HOK, is organised around a central plaza, entitled Al Wasl, enclosed by three large thematic districts. Each one is dedicated to one of the sub-themes of Expo 2020 — Opportunity, Mobility and Sustainability. The infrastructure of the 4.38 km2 Expo 2020 site was built by Orascom and BESIX. The site has an emergency centre which includes an isolation room, emergency care room, ambulances and helicopter services.

The Expo 2020 was officially opened on 30 September 2021. The ceremony featured performances by Italian tenor Andrea Bocelli (“The Prayer”), British singer Ellie Goulding (“Anything Could Happen”), Beninese singer Angelique Kidjo and Saudi singer Mohammed Abdu (a duet of John Legend’s “If You’re Out There”), American singer Andra Day (“Rise Up”), and Chinese pianist Lang Lang, among others.