Shahpoor Ahmad Azimi eats lunch with his family at his house in Yongin, South Korea. Reuters

A year after nearly 400 Afghan refugees fled the Taliban takeover of their homeland to settle in South Korea, many have swapped white-collar pursuits for factory jobs in a struggle with language and cultural challenges as they build new lives.

They were among the 79 Afghan families South Korea evacuated as Kabul fell to the Taliban in August 2021, permitting them long-term stays in return for having worked on its projects in the war-ravaged mountainous nation.

“It’s so hard to lose everything, especially your homeland,” Shahpoor Ahmad Azimi, 38, tearfully told Reuters just hours before he was due to begin his 12-hour overnight shift at a plastic factory in Yongin, south of Seoul, the capital.

A graduate of the elite Kabul University, with a bachelor’s degree in journalism who formerly worked with a Korean provincial reconstruction team in Afghanistan, Azimi now packs plastic products. 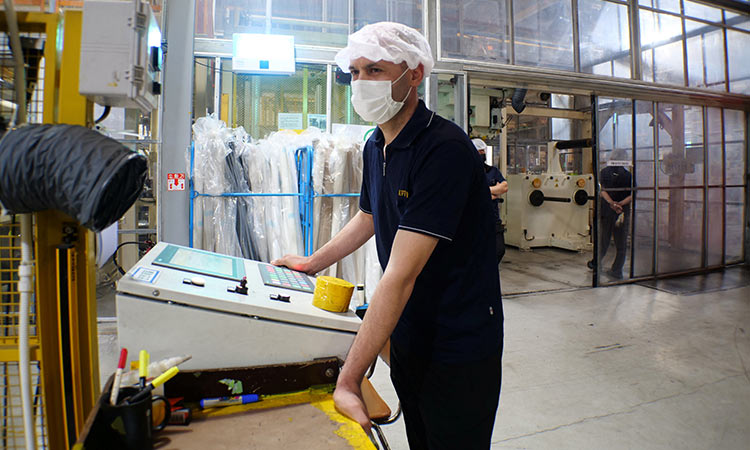 Shahpoor Ahmad Azimi works at a factory in Yongin. Reuters

Despite the career change, the job feeds his family, Azimi said, expressing gratitude to South Korea for helping them escape the Taliban which curbed the rights of women and girls, in particular, after it toppled the Western-backed government.

“My daughters can’t go outside alone in Afghanistan, can’t go to school alone,” Azimi added in an interview. “But here, we never think about (that) when they go out alone.”

Still, every day is a challenge, he said, with language shaping as the single biggest hurdle on the way to resettlement.

“Sometimes I can’t tell the exact reasons to my boss, or to my colleagues,” he added, describing the struggle to find the right words to explain himself in his new language.

“They ask, ‘Why couldn’t you do (something) like this?’ But I cannot say why.” 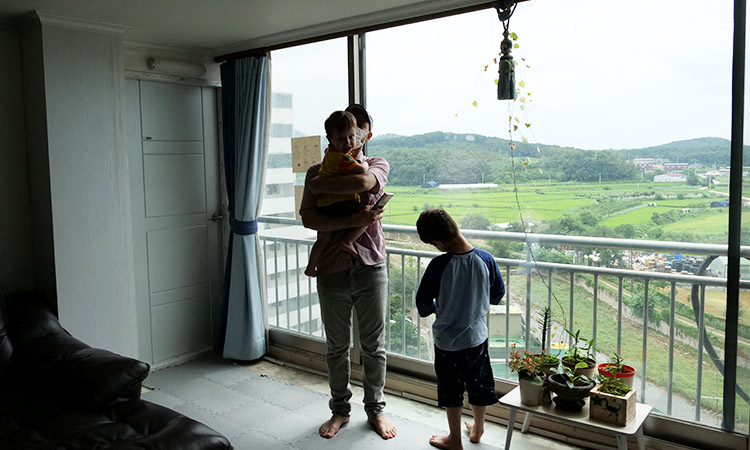 Shahpoor Ahmad Azimi shares a moment with his children. Reuters

While the government offers language classes for the refugees, few of those working shifts can find the time to attend.

“You see our schedule, there is no time to learn,” said Rahmatullah Rahmat, a former translator who now works with Azimi, pointing to a duty roster at the factory. “That’s the most difficult.”

Many of the evacuated Afghans in South Korea were office workers like Azimi, but most had to switch professions to find employment, government data show.

Of the 78 families still in South Korea by February, 72 individuals had found jobs in manufacturing and shipbuilding, with 15 having quit, the data show.

“They cited difficulty in adapting due to problems in communication, health and work environment,” said Song So-young, an official of a support group the government set up for the new arrivals.

Of 27 with backgrounds in medical services, just two were able to find jobs in the same sector. Now, the government is reviewing the matter of acknowledging the licences from, and the experience amassed, in their home country, Song said.

Cultural differences are sometimes evident in a country where many still believe in ethnic homogeneity. Some Korean parents held a protest against the entry of Afghan children in local schools when they first arrived last year.

Despite the host of concerns, Azimi said he had no plan to return to Afghanistan in the near future, for the well-being of his children, among other reasons.

Now, he added, he “never” thinks about the past and the life he had in Afghanistan, preferring to focus on a new start.

“If I think about my past, I will lose everything here. My family and my children. I start my life first from here.”