A herd of elephants make their way through the Hwange National Park, Zimbabwe, in search of water. File/AP

Africa’s national parks, home to thousands of wildlife species such as lions, elephants and buffaloes, are increasingly threatened by below-average rainfall and new infrastructure projects, stressing habitats and the species that rely on them.

A prolonged drought in much of the continent’s east, exacerbated by climate change, and large-scale developments, including oil drilling and livestock grazing, are hampering conservation efforts in protected areas, several environmental experts say.

How to pick the right protection cream for a baby

Pedal your way to a healthy lifestyle

The at-risk parks stretch all the way from Kenya in the east — home to Tsavo and Nairobi national parks — south to the Mkomazi and Serengeti parks in Tanzania, the Quirimbas and Gorongosa parks in Mozambique and the famous Kruger National Park in South Africa, and west to the Kahuzi Biega, Salonga and Virunga reserves in Congo.

The parks not only protect flora and fauna but also act as natural carbon sinks – storing carbon dioxide emitted into the air and reducing the effects of global warming. 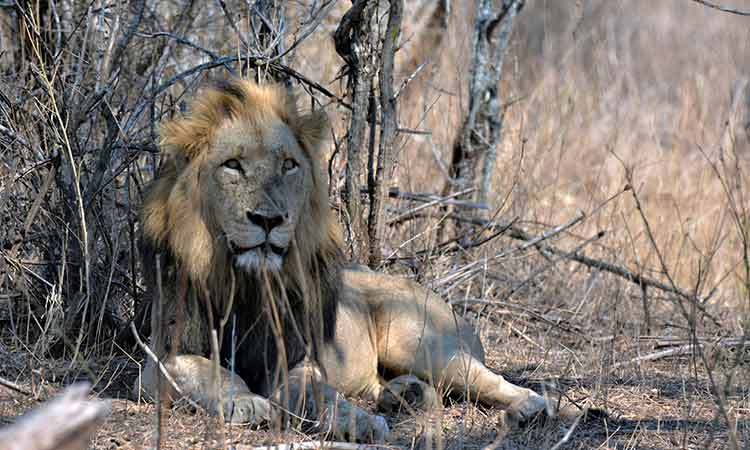 An estimated 38% of Africa’s biodiversity areas are under severe threat from climate change and infrastructure development, said Ken Mwathe of BirdLife International.

“Key biodiversity areas over the years, especially in Africa, have been regarded by investors as idle and ready for development,” said Mwathe. “Governments allocate land in these areas for infrastructural development.”

He added that the “powerlines and other energy infrastructure cause collisions with birds, due to low visibility. The numbers killed this way are not few.”

In their quest to bolster living standards and achieve sustainable development goals, such as access to clean water and food, boosting jobs and economic growth and improving the quality of education, African governments have set their sights on large building projects, many of them funded by foreign investments, especially by China.

The growth of urban populations and the building that goes with it, like new roads, electricity grids, gas pipes, ports and railways, have also added to the pressure on parks, conservationists said.

But they add that replacing wildlife with infrastructure is the wrong approach for economic growth. 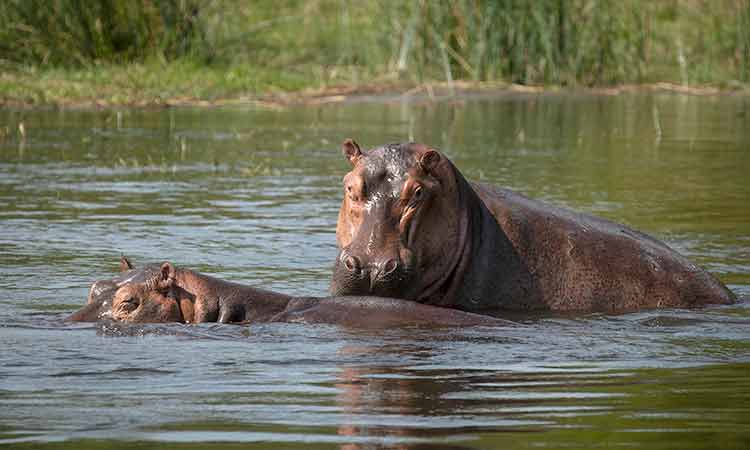 A pair of hippopotamuses cool off in the Nile river near the waterfalls in Murchison Falls National Park, Uganda. File/AP

“We have to have a future where wildlife is not separated from people,” said Sam Shaba, the program manager at the Honeyguide Foundation in Tanzania, an environmental non-profit organisation.

When “people start to see that living with wildlife provides the answer to sustainable development … that’s the game-changer,” said Shaba.

Most of Africa’s wildlife parks were created in the late 19th and early 20th centuries by colonial regimes that fenced off the areas and ordered local people to stay out. But now conservationists are finding that a more inclusive approach to running the parks and seeking the expertise of Indigenous communities that live around the parks can help protect them, said Ademola Ajagbe, Africa regional managing director of The Nature Conservancy.

“The inhabitants of these areas are forcefully evicted or prevented from living there such as the Maasai (in Tanzania and Kenya), Twa and Mbutis (in central Africa) who for generations have lived with wildlife,” said Simon Counseill, an advisor with Survival International.

“Africa is depicted as a place of wildlife without people living there and this narrative needs to change,” he said.

“If we don’t pay attention to communities’ social needs, health, education and where they are getting water, we miss the key thing,” said John Kasaona the executive director of the Integrated Rural Development in Nature Conservation in Namibia. 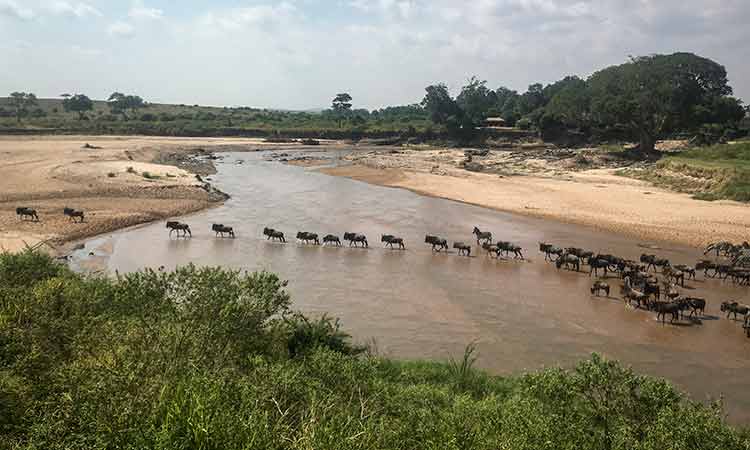 This photo shows the migration of wildebeest from Tanzania to Kenya. AP

The effects of worsening weather conditions in national parks due to climate change should also not be ignored, experts said.

A recent study conducted in Kruger National Park linked extreme weather events to the loss of plants and animals, unable cope with the drastic conditions and lack of water due to longer dry spells and hotter temperatures.

Drought has seriously threatened species like rhinos, elephants and lions as it reduces the amount of food available, said Philip Wandera, a former warden with the Kenya wildlife Service who’s now range management lecturer at the Catholic University of East Africa.

He added that financial help to “support communities in and around national parks” would also help preserve them.