Artefacts on display at Syria Pavilion.

The inauguration of ‘Restoring Syrian heritage and reviving local communities’ workshop took place at Expo 2020 Dubai. It was organised by the Syria Trust for Development, in cooperation with the Syria Pavilion at the Expo. The event began with opening remarks by Omar Shehadeh, Chief International Participants Officer, Expo 2020 Dubai. Fares Kallas, trustee of the Syria Trust for Development, introduced the workshop.

“Restoring Syria’s tangible and intangible heritage is a priority for us, but we know that we cannot do this alone,” he said. “We know that this is a task that national and international efforts need to come together for. Not to help Syria alone, but to help in cementing the spirit of humanity in what we do and leaving a legacy to be proud of.”

The first presentation in the workshop titled The Status of Syria’s World Heritage Sites was by Lina Kuteifan, Director of International Relations, Directorate-General of Archeology and Museums in Syria (DGAM).

Artificial sweeteners not safe may up cancer risk: Study

In her presentation, Kuteifan presented details of the current situation of Syrian cultural heritage sites and of the communities living around them, with a special focus on the six sites inscribed on the UNESCO World Heritage List.

Three panel discussions were held during the first day of the workshop titled The Role of International Organisations for Syrian Cultural Heritage; Experiences in Recovering Cultural Heritage and Local Communities; and The Case Of Aleppo. 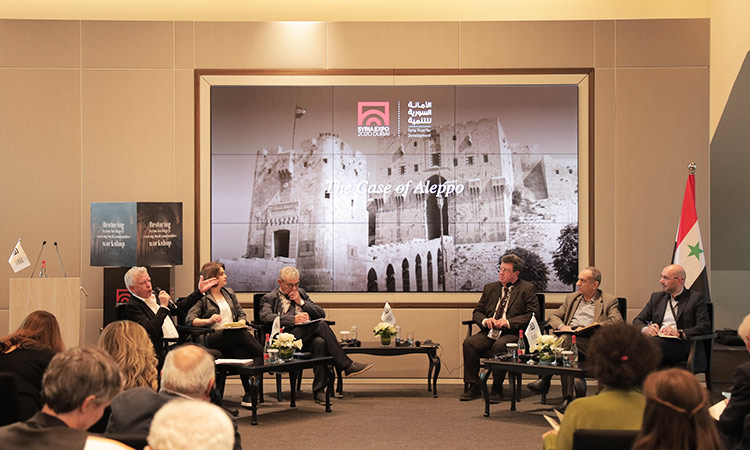 A panel discussion on Syrian heritage.

Following the panel discussions, Michelangelo Pistoletto, one of the world’s most influential living artists, addressed the audience by video link to announce the new installation of his iconic The Third Paradise in the world at the heritage site of the old city of Aleppo. Pistoletto is an Italian painter, action and object artist and art theorist, and is acknowledged as one of the main representatives of the Italian art movement, Arte Povera.

His work mainly deals with the subject matter of reflection and the unification of art and everyday life. He chose Aleppo as home for The Third Paradise as a symbol of the city’s rebirth and plans for peace and reconciliation.

The objective of the workshop was to establish solutions, proposals and resources needed for developing a roadway towards recovering Syria’s outstanding world heritage.

The United Nations Educational, Scientific and Cultural Organization (UNESCO) World Heritage Sites are places of importance to cultural or natural heritage as described in the UNESCO World Heritage Convention, 1972.

The Syrian Arab Republic accepted the convention in 1975, making its historical sites eligible for inclusion in the list. As of 2016, six sites in Syria are included.

The first site in Syria, Ancient City of Damascus, was inscribed in the list at the 3rd Session of the World Heritage Committee, held in Paris, France, in 1979. The Ancient City of Bosra and Site of Palmyra were inscribed the following year as the second and the third sites, while the Ancient City of Aleppo was added in 1986. Crac des Chevaliers and Qal’at Salah El-Din were added collectively to the list in 2006, followed by Ancient Villages of Northern Syria in 2011. All six of Syria’s properties have been placed on UNESCO’s List of World Heritage in Danger since 2013, as their integrity has been to varied degrees compromised following the outbreak of armed conflict in the country – Aleppo in particular has suffered extensive damage, while a number of prominent structures in Palmyra have been destroyed.

The Syria Trust for Development is a national development organisation leading social change on the ground in Syria. Its work is predominantly in the field, where it works hands-on with individuals and communities, to initiate lasting solutions to development challenges.

The Trust is NGO-accredited to provide advisory services to the UNESCO Committee of the 2003 Convention. Its projects include the safeguarding and promotion of Syria’s intangible cultural heritage, as a tool for the socioeconomic development of communities, and the restoration work for heritage sites such as the Ancient City of Aleppo. The Syria Pavilion showcases a rich civilisation that has laid some of the foundations of the modern world. It was Syria that was home to the first crop, first alphabet and first music note and poem. “We were the first true example of the “Connecting Minds, Creating the Future” theme of Expo 2020 Dubai, and we are confident that our rich heritage and pioneering nature will fuel our bright future,” says the Pavilion.