Kirstie Allsop poses for a photograph.

Kirstie Allsopp has said many young people could afford to buy a home if they made more sacrifices.

Speaking to “The Sunday Times,” the “Location, Location, Location” presenter explained that she bought her first property with help from her family at the age of 21, when the average house price in the UK was roughly £51,000.

“When I bought my first property, going abroad, [and] the easyJet, coffee, gym, Netflix lifestyle didn’t exist,” she said.

I feel safe being a foreigner in Dubai says a tourist

Allsopp added that new “drains on the finances of the young homebuyer” had delayed the process. 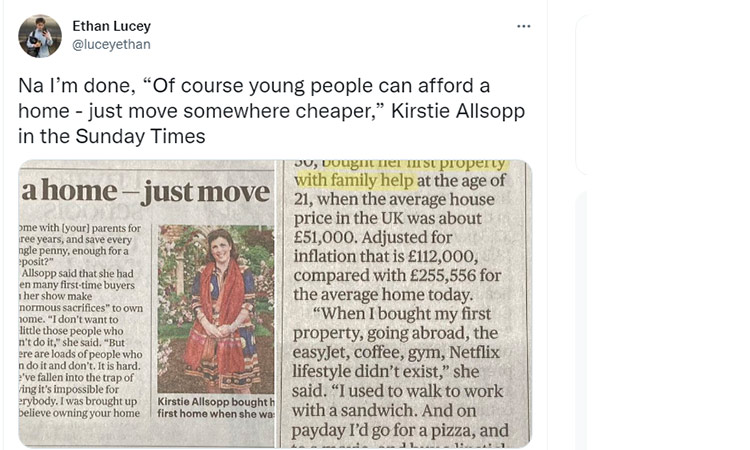 “I do think you have to ask yourself what your degree is giving you,” she added.

“Could you get a job at 18, stay at home with [your] parents for three years, and save every single penny, enough for a deposit?”

Allsopp insisted that she had come across several first-time buyers who had made “enormous sacrifices” to make it work.

“I don’t want to belittle those people who can’t do it,” she continued. “But there are loads of people who can do it and don’t. It is hard.

“We’ve fallen into the trap of saying it’s impossible for everybody. I was brought up to believe owning your home is the be all and end all and in a way I still believe that … it’s about where you can buy, not if you can buy. There is an issue around the desire to make those sacrifices.”

Allsopp has been criticised for her comments on social media.

“Kirstie Allsopp, daughter of Charles Henry Allsopp, 6th Baron Hindlip, privately educated at Bedales has wondered why young people don’t buy a house at 21, as she did,” tweeted one person.