An aerial picture shows tourists walking on a path amid ash from the Tajogaite volcano eruption. AFP

When the volcano erupted in La Palma last year, Teodoro Gonzalez Perez rushed to the Spanish island to see the lava flows with his own eyes — now he’s back for another look.

This time, he’s here to see the volcano closer up now it has quieted down.

“It’s like walking on the surface of a new planet,” said the 54-year-old nurse from the nearby island of Tenerife while hiking through a lush pine forest carpeted with black ash to reach the site. 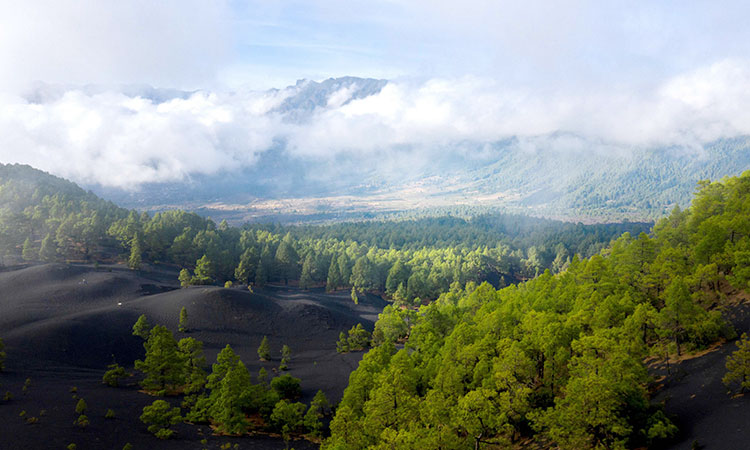 An aerial view of the Tajogaite volcano, in the Cumbre Vieja mountain range. AFP

“Visiting a volcano which recently erupted is an opportunity that only arises once in a lifetime,” he told AFP.

Since the volcano erupted on September 19, 2021, spewing rivers of molten rock and ash plumes into the air, interest in visiting La Palma is booming.

The island is normally one of the less visited ones of Spain’s tourism-dependent Canary Islands off Africa’s northwestern coast.

In August, the average hotel occupancy on the island hit 90.9 percent, well above expectations, with visitors from the rest of Spain accounting for the bulk of the overnight stays, according to local hotel lobby group ASHOTEL. 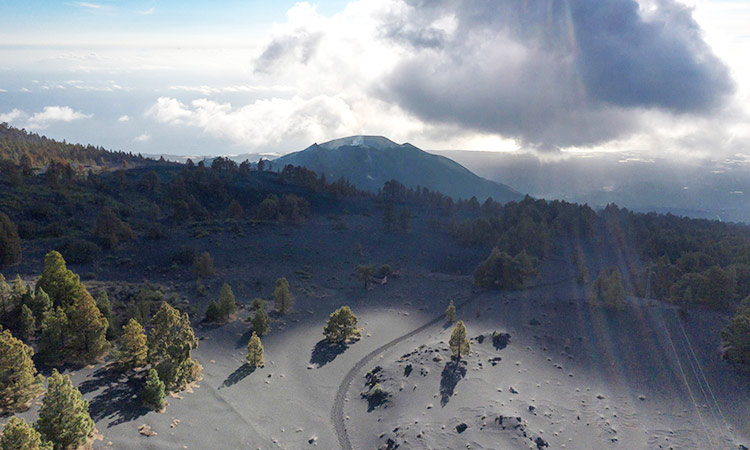 Trees emerging from ash covering a hill one year after the eruption of the Tajogaite volcano. AFP

“On the one hand, the volcano has been a misfortune, a huge blow to the island’s economy. On the other, I think half the planet has now heard of La Palma.”

While the images beamed around the world during the 85-day eruption focused on the destruction caused by the volcano, news reports also highlighted the tiny island’s charms — which has helped whet the appetite for travel to La Palma.

As close as possible

Since the eruption, the number of cruise ships stopping at the island has increased, as has the number of direct flights from mainland Spain and elsewhere in Europe.

Irish low-cost airline Ryanair opened its first base in La Palma in March and offers several direct flights per week to three Spanish cities as well as Milan. 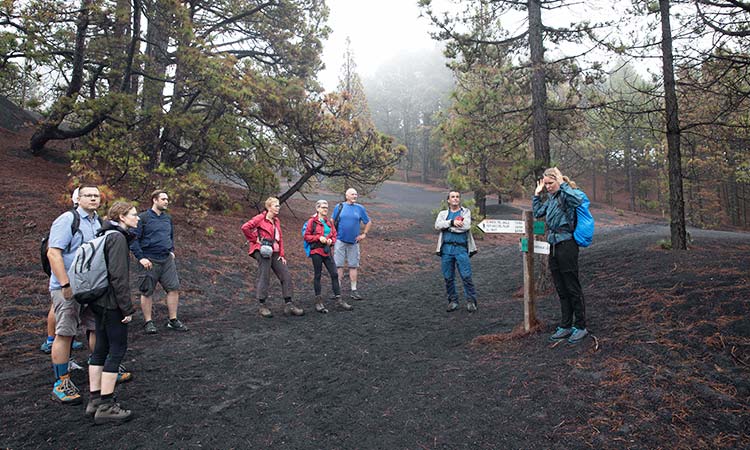 Graja-Tours owner and guide, Lotte von Lignau (R), talks to hikers as they take part in a tour to visit the Tajogaite volcano. AFP

Business is also booming for tour companies offering day trips by ferry from Tenerife, the largest and most visited island of the Canaries.

Excursiones Jesus, based in Tenerife, runs its 135-euro ($135) 11-hour tour of La Palma three days a week now, up from just one before the eruption.

“People want to get as close as possible to where the eruption happened,” company founder Jesus Molina told AFP.

The ash and rivers of lava spewing from the volcano swallowed up more than 1,000 homes, cut off highways and suffocated lush banana plantations.

On a recent weekday, small groups of tourists could often be seen snapping pictures of excavators removing giant chunks of solidified lava from the centre of La Laguna, a town where the molten rock swallowed up a gas station and a supermarket.

Among those flocking to the island are regular visitors, one of whom is Rita Ley, a retired German woman who said she wanted to see what it looked like after the eruption. 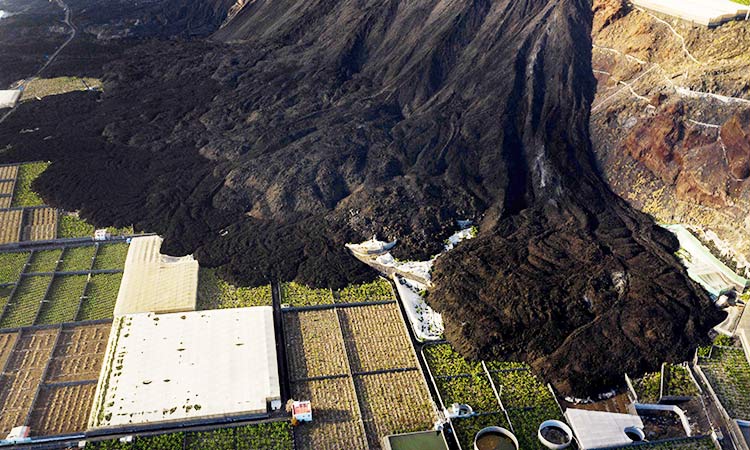 Streams of lava that cover banana plantations near Puerto de Naos, on the Canary island of La Palma. AFP

“It is terrible to see that everything is destroyed, but it’s interesting to see how the earth is alive,” said the 59-year-old.

The government now sees tourism as key to the recovery of the island’s economy.

It has spent heavily to promote travel to La Palma and has given away 20,000 travel vouchers worth 250 euros to residents of Spain that can be used in hotels and restaurants on the island.

To help draw more tourists, the authorities have inaugurated a new zip-line and a visitors’ centre at the Roque de los Muchachos astronomical observatory.

It is also helping restore the tourism infrastructure.

Around 3,000 of La Palma’s 8,000 tourist beds were either destroyed in the eruption, or are located in areas that remain off limits due to dangerous levels of volcanic gases, mainly in Puerto Naos on the southwestern coast.

Hawaii and Iceland saw a similar increase in tourists after they experienced volcanic eruptions but visitor interest eventually waned and some tourism operators in La Palma expect the same to happen.

Jonas Perez, founder of Isla Bonita Tours, predicted the volcanic eruption “won’t be as fresh in people’s memory” in a few years.

“La Palma will no longer be as popular,” he said.