Manal Rostom gestures at the top of Mount Everest.

Egyptian Manal Rostom achieved the dream of her life after raising the Egyptian flag over the highest mountain peak in the world, Mt Everest.

Rostom became the first Egyptian woman to achieve this global achievement, after a five-day adventure, according to local media.

The 39-year-old posted a video on her Facebook account documenting the moment she reached the top of the highest mountain in the world and raised the Egyptian flag.

Just made it to base camp and I’m catching up on what’s been happening.”

WE DID THIS TOGETHER.”
So much to share and say.”

For now, here’s a short video to mark this moment in History.”

Can’t believe I’m now the first Egyptian Woman to stand on top of the world. A 15-year old dream has finally come true.”

The Egyptian girl started her work in the field of pharmacy after graduating from university, and left the field after 14 years to devote herself to sports and participate in many marathons around the world. 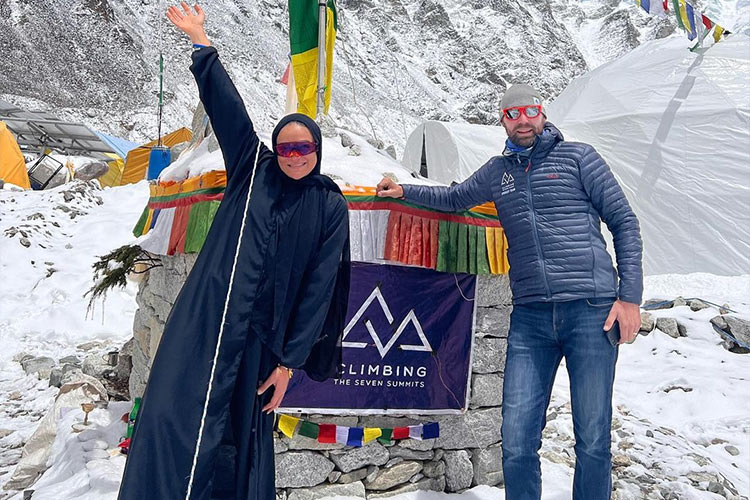 Manal Rostom poses for a photograph at Everest Base Camp.

She shared another video for her community, called the “Surviving Hijab.”

Rostom wrote, “A message to the @survivinghijab community from the Top of The World‼

“The video got cut off at the end as the camera died because of -20 degree weather.”
“I meant to say —
“This to every Hijabi girl who’s been told that she couldn’t , wouldn’t or shouldn’t, here’s the girl next door from the top of the world, showing you all what’s possible.”

“In case you didn’t know, it’s 2022, and there are still #Burkini Bans in place, #hijab bans in place on jobs, places and spaces in some countries around the world.

So here’s what’s possible.
Reminder: Hijab is not the Oppression, SOCIETY IS‼
From the top of the world.”

She was chosen as the first Hijabi Arab-Egyptian woman as an advertising front for an international company specializing in the manufacture of sportswear.

During her life, Manal achieved many sporting achievements, as she climbed the highest peak of Mount Kilimanjaro in Tanzania, estimated at 5,895 meters, and also climbed the second highest mountain peak in the world in Kenya in 2013.

Her sporting achievements included climbing the highest peak in Europe, “Elbrus,” its height is 5,642 meters.