A photo shows several Arabidopsis plants sprouting from lunar soil at a laboratory at the University of Florida in Gainesville. AFP

In an advanced step towards space farming, for the first time, scientists were able to grow plants in a few grams of soil taken from the moon, which was brought back decades ago by the Apollo programme astronauts.

This success raises hopes that it will one day be possible to grow plants directly on the moon, which will save future explorers a large amount of expensive tools to take on their longer and farther space journeys.

Much research and work still needs to be done before implanting on the moon, according to a study prepared by researchers from the University of Florida and published in the journal Communications Biology.

“This study is important to NASA’s long-term human exploration goals,” NASA President Bill Nelson commented on the study in a statement, adding: “We will need to use the resources on the Moon and Mars to develop food sources for future astronauts who will live on Earth.” 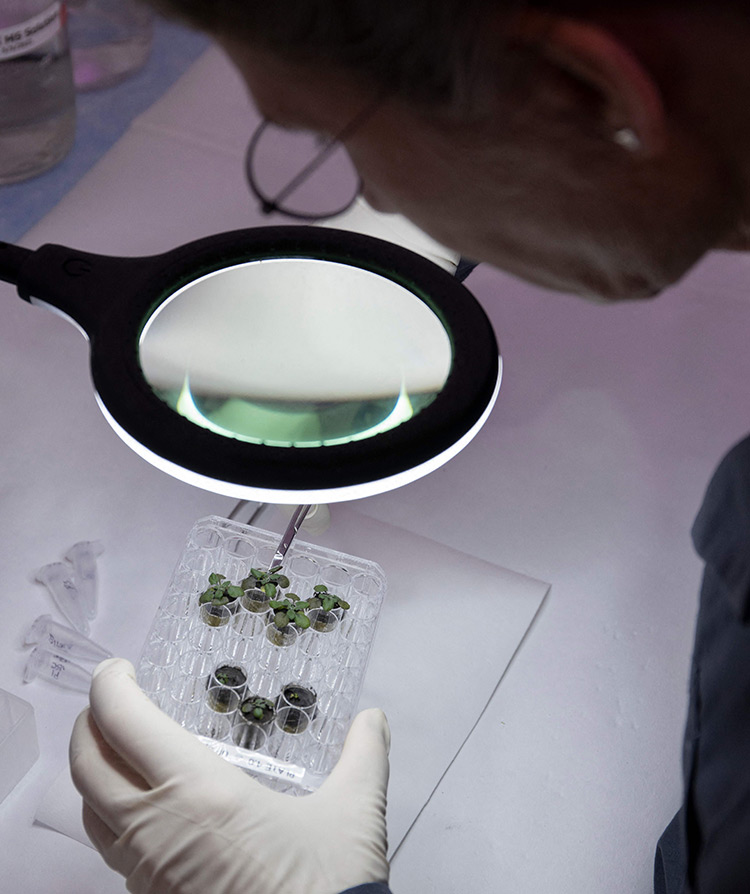 For their study, the researchers used only 12 grams of lunar soil (equivalent to a few teaspoons) collected from various places on the moon during the Apollo 11, 12 and 17 missions. And they put in very small pots about a gram of soil (called regolith) and added to it water and then seeds, and they added a nutrient solution on a daily basis.

The mouse ear cress was chosen for planting because it grows easily and many studies have been conducted on it; its genetic code and how it interacts in hostile environments all the way to space are well-known factors.

All plants, whether grown in lunar soil or in observational samples, looked similar until day six, lead study author Anna-Lisa Ball said in a statement.

But after that period, plants grown in lunar soil grew more slowly and had thin roots.

After twenty days, the scientists picked the plants and studied their DNA, and found that lunar plants responded in the same way that they interact in hostile environments, such as planting them, for example, in soil containing a large proportion of salts or heavy metals.

In the future, scientists plan to conduct research to see how to make a hostile environment more suitable for plants.

NASA is preparing to return to the moon within the framework of the “Artemis” program, with the aim of seeking to establish a sustainable human presence on it.