Translator and assistant Katia helps students from Ukraine in a class newly created for them at the Limanowski High School in Warsaw on Tuesday. AFP

Stuck to the door of one Warsaw high school is the sign “Laskavo prosimo do shkoli,” or “Welcome to school” in Ukrainian, along with the flags of Poland and Ukraine.

Chattering in Russian and Ukrainian, teenagers who have just fled their war-torn homeland use magnetic key cards to enter and are welcomed again with a large yellow-blue flag and the slogan “Slava Ukraini” or “Glory to Ukraine.”

It is their first day of school in Poland, where the 13- to 15-year-olds have sought shelter since Russia invaded their country. Divided into two groups of 20, they are greeted by their new teacher, who shuttles from one classroom to the other throughout the lesson.

From the Ukrainian city of Lviv, a refugee just like them, Mariana Druchek, lays out the plan for the day and passes out a Maths test. “Uh oh,” comes the response. Viktoria, 16, and 15-year-olds Polina and Zoriana are in a panic. 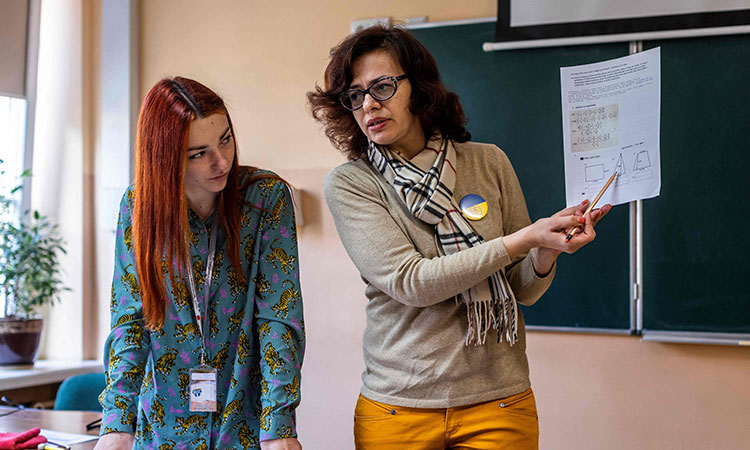 “It’s on things we covered three years ago, in grade eight — I forgot it all,” said Viktoria, to which the others chime in with “same.” But they relax soon enough. By break time, they are all smiles, saying the atmosphere is “really good” and “positive” and “the class and school in general are all right.”

It is as if their mad dash out of Kyiv with barely any luggage — to the backdrop of bombs and blasts —was already fading somewhat into the distance. But the sense of danger is still there. “We’re afraid the Russians will even make their way over here, because everything is possible,” Viktoria said.

Limanowski High School has been able to accommodate the new students and hire new teachers thanks to funding from the mayor’s office.

On day one, Renata Kozlowska, a city official for the school’s neighbourhood of Zoliborz, came to welcome the teenagers.

She told them that “all of Poland is with you” and stressed that they have the right to “an education and peace.” The teenagers — who come from various cities, including Kyiv, Zhytomyr, Lutsk and Ivano-Frankivsk — will follow a pared-down version of Poland’s curriculum, including English, Polish, history, Maths, Physics and Gym. 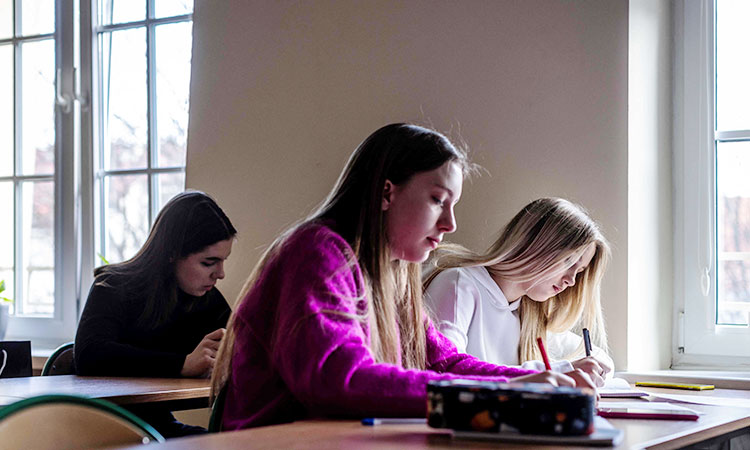 Students from Kiev (from L) Veronika, Polina and Zoriana attend a class. AFP

The classes will be taught by Ukrainian teachers who themselves had fled the war, with a bilingual educator at the helm of each group.

“What’s most important is to offer them some semblance of normalcy and quiet,” the school’s principal Andrzej Wyrozembski said.

Druchek, who crossed into Poland with her three children just after the invasion, agrees.

“It’s not a matter of maintaining their knowledge levels, but to make sure they have psychological support and friends, that they know that everyone wants to help,” she said.

Janusz, a Polish student at Limanowski, said he is all for the initiative, calling it “cool” to have welcomed the Ukrainians into their school. “It means they can keep going to school and won’t be thinking non-stop about what’s going on in Ukraine,” he added.

While the new students will be attending separate classes from their Polish counterparts, the school is keen on helping them integrate. Each Ukrainian will be partnered up with a Pole their age to join for after-school activities and the like.

Limanowski is the first school in town to have launched such a programme, but others are due to follow soon. Wyrozembski stressed that it was his teachers who took the lead on the initiative once refugees began flooding Poland.

But he too had his reasons to get involved: when Nazi Germany attacked Poland in September 1939, his father fled Warsaw for Lviv, which was a Polish city at the time. 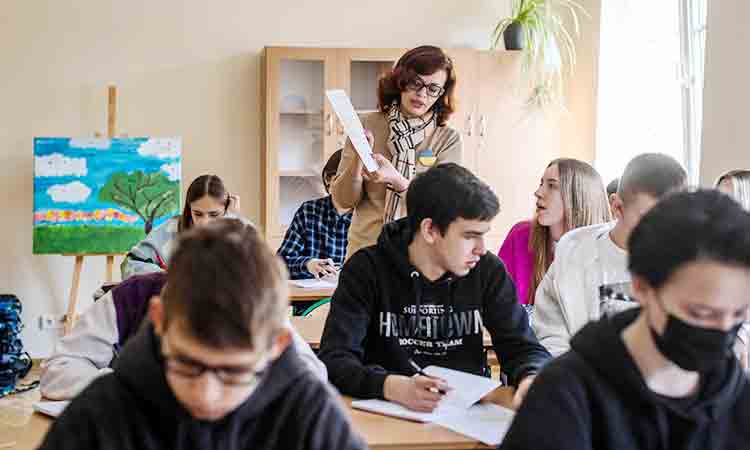 Mariana Druchek teaches a group of Ukrainian students in a class newly created for them in Warsaw. AFP

Since the invasion began, nearly 54,000 Ukrainian children have been enrolled in Polish schools, Education Minister Przemyslaw Czarnek said on Wednesday.

For Wyrozembski, the most important thing now would be to set up special schools for Ukrainian students aged 16 and 17, who would normally be preparing for a final exam before college.

Were they to switch to the Polish curriculum now and prepare for the equivalent testing here, it would “put them back three or four years,” he said.