A videograb from the viral clip.

Sesame Place, a US theme park based on the children’s TV show Sesame Street, has apologised after a viral video appeared to show one of its costumed staff shunning two young Black girls.

The Philadelphia-based Park came under fire over the weekend after digital strategist Leslie Mac posted a video to Twitter from her daughter Paige’s 4th birthday celebration.

The video shows a performer dressed in a Rosita costume high-fiving other visitors before waving off Paige and her friend when she gets to them. 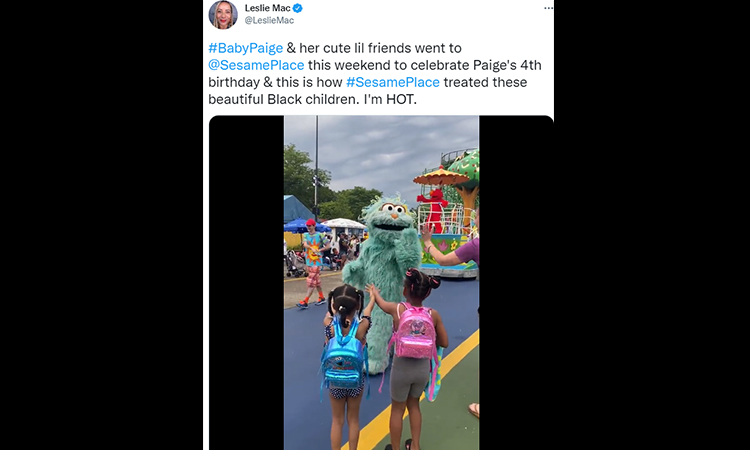 In a statement posted on Tuesday (19 July), the theme park wrote: “We sincerely apologise to the family for their experience in our park on Saturday; we know that it’s not ok. We will conduct training for our employees so they better understand, recognise and deliver an inclusive, equitable and entertaining experience to our guests.”

The apology comes after the video caught the attention of singer Kelly Rowland. The musician reposted the video to her Instagram Story on Sunday with the caption, “OH HELL NAWWW”.

Rowland posted a follow-up clip where she said: “OK, so had that been me, that whole parade would’ve been in flames.”

In an initial statement posted Sunday evening, the park claimed that costumes sometimes inhibit performers’ sightlines, and that the “no” gesture was a response to people asking the performer to hold their children, which is against park policy.

Rowland responded to this, too, in the comments, writing: “Those gorgeous girls will never forget that feeling! THEY ARE KIDS!!!!! You should be ASHAMED of yourselves for this pathetic statement!”

Following the backlash, Sesame Workshop, the nonprofit behind Sesame Street, has promised to conduct bias training with the theme park staff.

“What these children experienced is unacceptable,” the organisation’s statement read.

“We have been in contact with Sesame Place, our licensed park partner, and they have assured us that they will conduct bias training and a thorough review of the ways in which they engage with families and guests.”