Sheikh Mohammed with federal ministers during the launch of the World’s Coolest Winter Campaign at Expo 2020 Dubai on Wednesday. WAM

His Highness Sheikh Mohammed Bin Rashid Al Maktoum, Vice President, Prime Minister and Ruler of Dubai, on Wednesday launched the second season of the World’s Coolest Winter campaign. Launched at a special event at Expo 2020 Dubai site, this year’s edition will expand on last year’s campaign and will cover both domestic and foreign tourism. 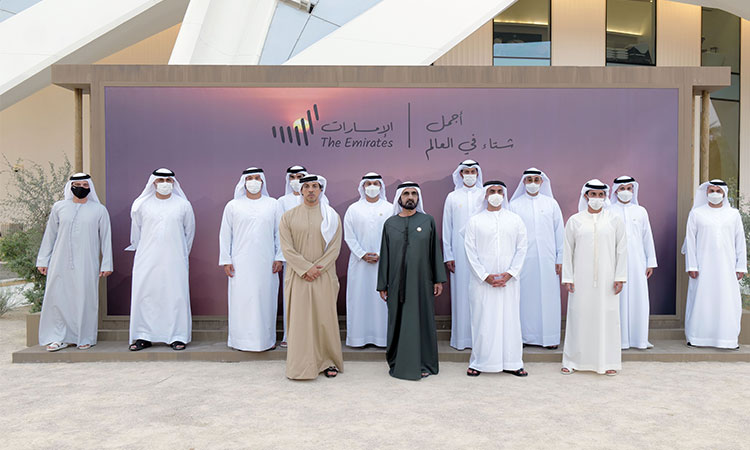 Sheikh Mohammed with top dignitaries during the launching ceremony of the World’s Coolest Winter Campaign at Expo 2020. WAM

In a series of tweets through his official account, Sheikh Mohammed said, “Today, we launched the second season of the World’s Coolest Winter campaign, in collaboration with federal entities and local tourism departments, reinforcing the UAE as one destination, as we outlined in the Principles of the 50.” 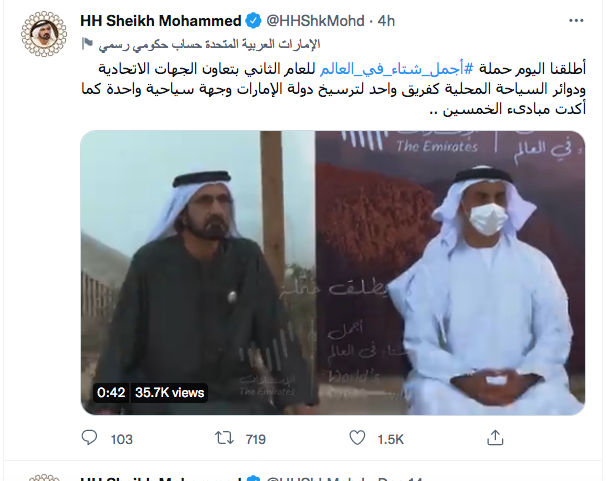 He then tweeted, “The primary target audience of the campaign is domestic and family oriented, with the aim of gathering our families in our beautiful nation. We want families from Dubai and Abu Dhabi to enjoy Ras Al Khaimah and Fujairah, and families from other emirates to experience Abu Dhabi and Dubai. Everyone should enjoy the Emirates.” 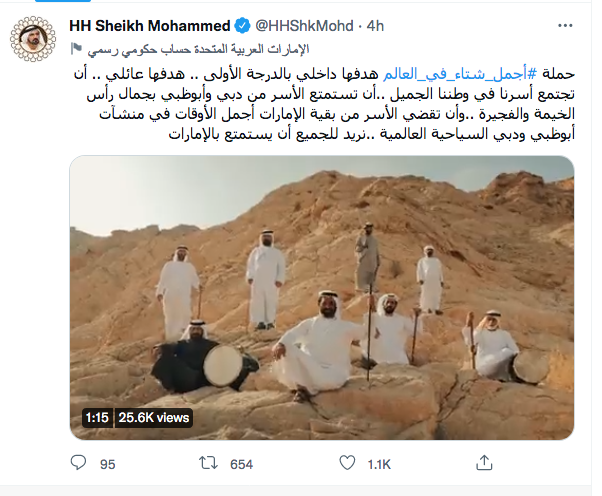 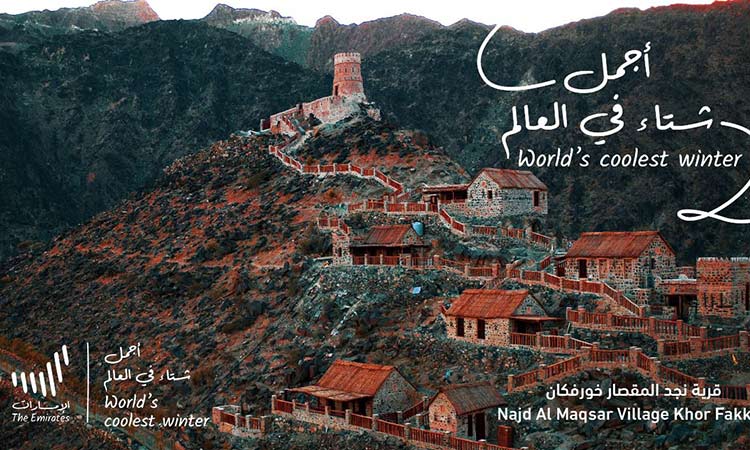 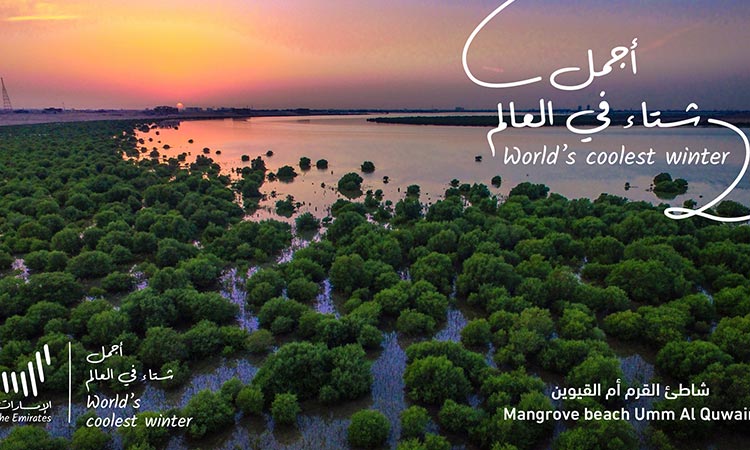 The second season of the World’s Coolest Winter campaign is carried out by the UAE Government Media Office, in collaboration with the Ministry of Economy and relevant tourism and culture entities. It is the largest campaign of its kind and will highlight the diversity of the UAE’s touristic and recreational attractions, the beauty of its natural landscapes, and the hospitality of its people, it will run from Dec.15, 2021 until the end of January 2022 to familiarise residents and international tourists with the activities that the UAE winter offers. 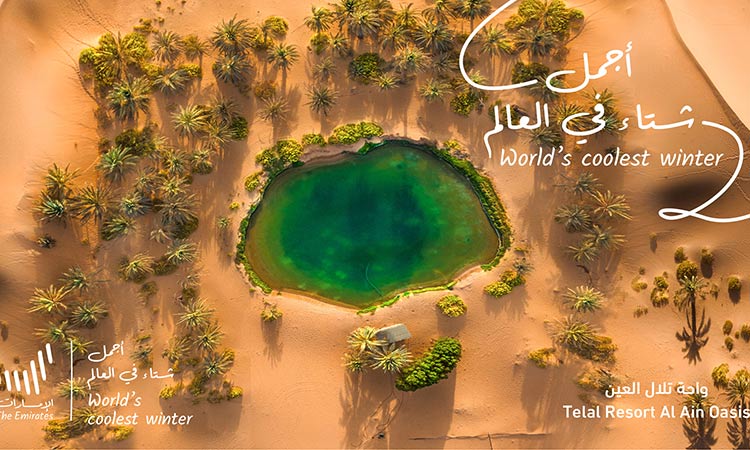 This year’s World’s Coolest Winter campaign is an open invitation to all citizens and residents, as well as visitors to the UAE, to capture their most beautiful experiences, adventures and memorable moments in various parts of the country and share them across digital platforms. 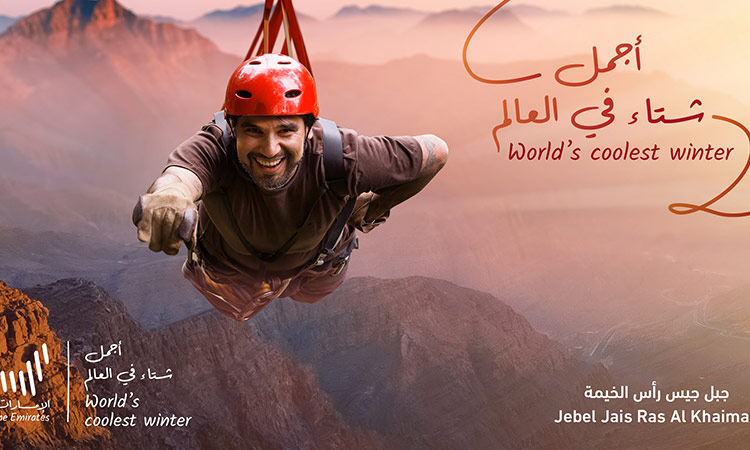 It is hoped that this will result in inspiring photo and video content on the UAE’s tourist and entertainment experiences, cultural events and enjoyable adventures, highlighting not only the country’s diversity but also its safety and the effective measures taken against COVID-19. 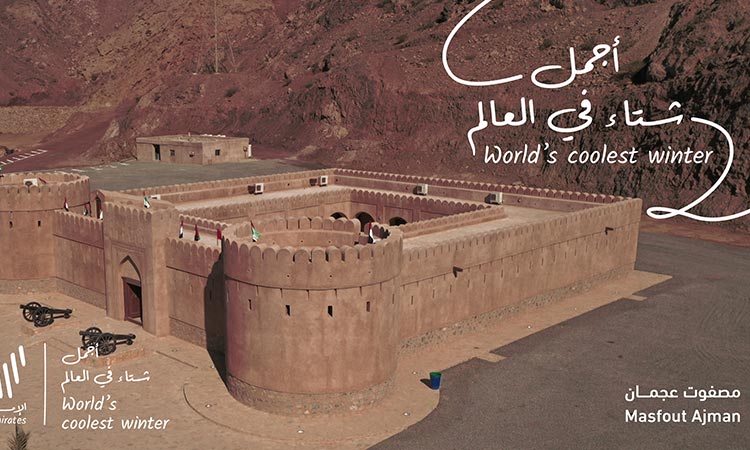 The campaign also opens the door for influencers and celebrities from the country, the Arab region and the world to introduce the most prominent tourist attractions to their millions of followers.

This year’s edition of the World’s Coolest Winter campaign celebrates the human element in every visit to the UAE, which is central to its status as a sought-after global tourist destination with a relaxed and friendly atmosphere and is reflected in its values of tolerance, inclusion and respect for every visitor from every background. 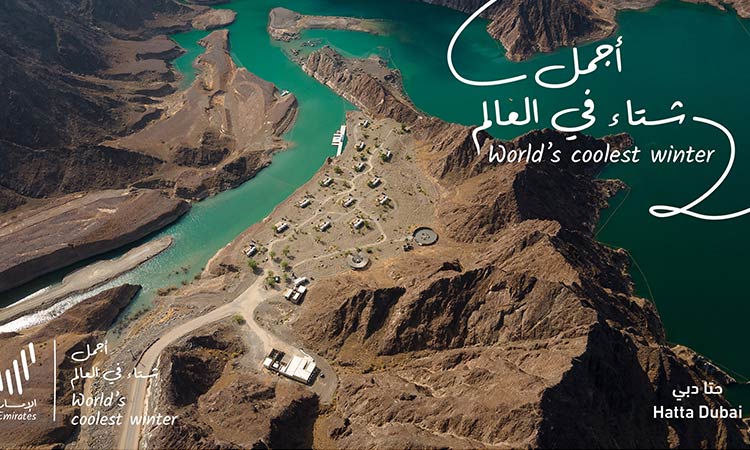 The “World’s Coolest Winter” campaign is expanding this year to target international visitors, presenting the most important tourist and entertainment destinations in the country, its nature, culture, heritage, history, architecture and landmarks, and highlighting the distinctiveness of the tourism experience in each of the seven emirates. The campaign is also accompanied by the provision of many exclusive promotions for the campaign by tourist establishments, hotels, shops and restaurants. 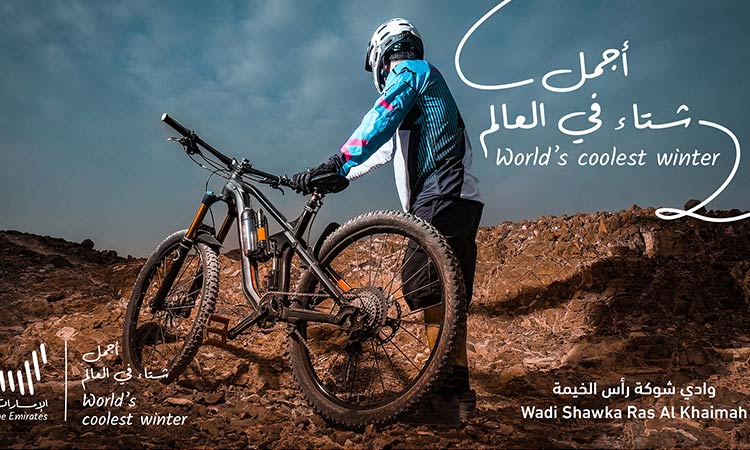 The UAE’s Tourism Sector in Numbers 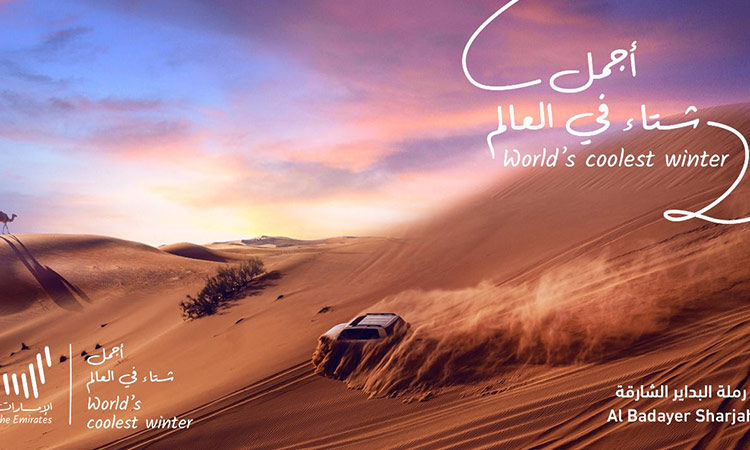 In the first half of 2021, hotel and tourist establishments attracted about 8.3 million guests, a growth of 15% compared to the first half of last year. During the same comparison period, the number of hotel nights spent by guests amounted to around 35 million nights, a growth of 30%, and the average guest stay increased to 4.1 nights, with a growth of 12.5%. This was accompanied by a 31% growth in hotel establishment revenues, to reach Dhs11.3 billion. The share of domestic tourism reached more than 30% of the total guests of hotel establishments. 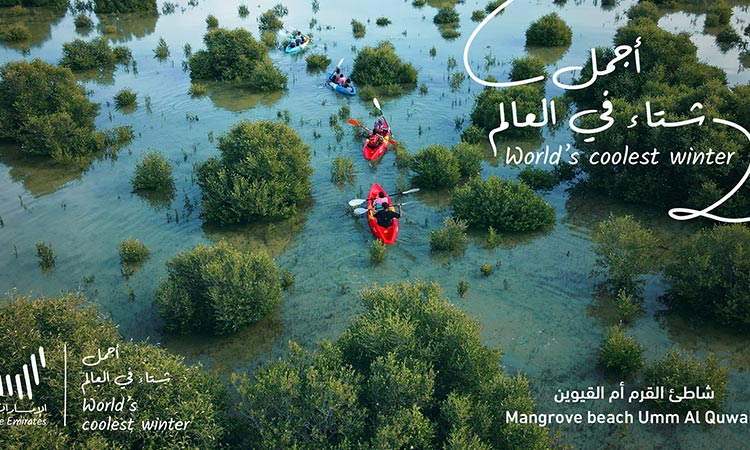 The global data website Statista expects the UAE to attract more than 31 million tourists annually by 2025, and the travel and tourism sector to contribute Dhs280.6 billion to the UAE’s GDP by 2028. 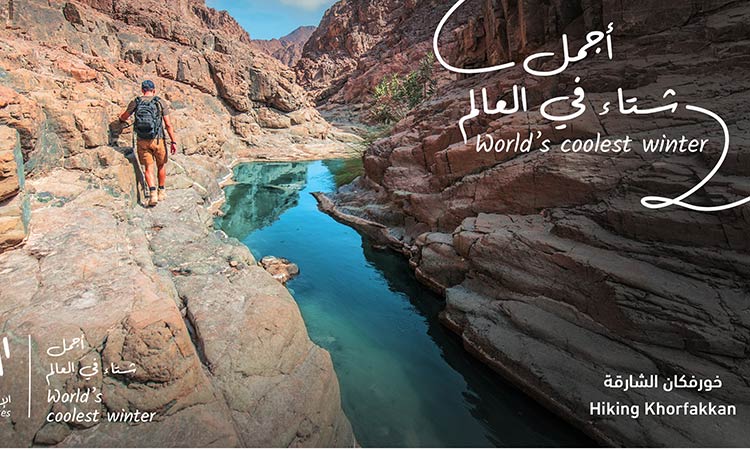 The UAE’s unique tourism offering features a huge range of activities that includes ecological and sustainable tourism, which offers visitors from all over the world the opportunity to visit the UAE’s nature reserves, oases, mountains, beaches and islands; desert tourism, including safari trips, sand boarding, and oases among rolling sand dunes; beach tourism, including options for water sports and free diving; and mountain tourism, including hiking activities, mountain biking, rock climbing and canyoning. 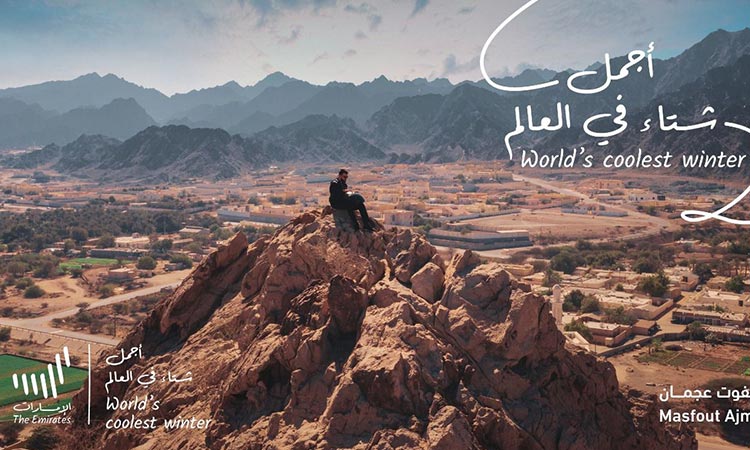 There is also a burgeoning adventure tourism scene, which includes deep-sea diving, parachute jumping, paragliding and other exciting, daring and challenging sports. The country’s cultural and heritage offering includes historical and heritage sites and various museums, while tourism for major festivals and celebrations will take in Expo 2020 Dubai, the largest human event of its kind in the world, as well as artistic, musical and entertainment. Finally, shopping tourism presents visitors with shopping festivals, offers and discounts in various regions of the country. 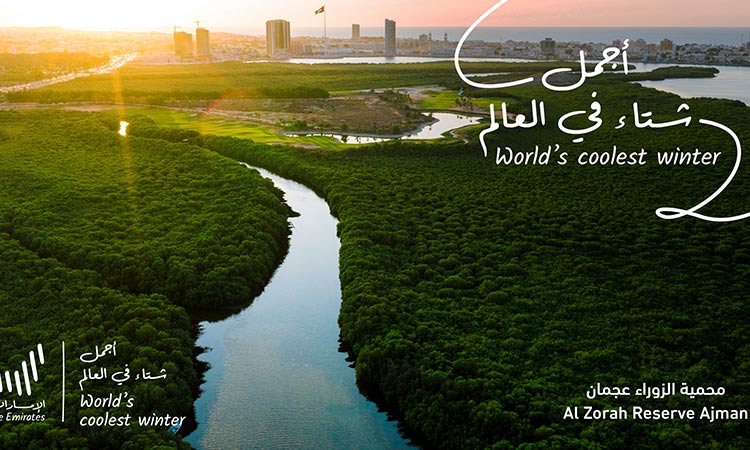 During the mild winter season, the UAE also offers an ideal destination for the MICE (meetings, conference incentive and exhibition) sector, as well as resources for health and medical tourism, providing visitors from all over the world the opportunity to benefit from world-class health services as well as recuperation during the winter with its cool air and moderate heat.

The “World’s Coolest Winter” campaign unites all tourism and promotional efforts and initiatives in the UAE in coordination and integration with various institutions and relevant authorities locally and federally, to activate internal tourism throughout the country, in addition to external tourism to attract tourists from all over the world, especially from countries experiencing severe winters. The campaign urges all entities and institutions working within the tourism sector in the country to develop and present a competitive, distinct and diversified tourism product that meets the various expectations and interests of internal and external tourists. 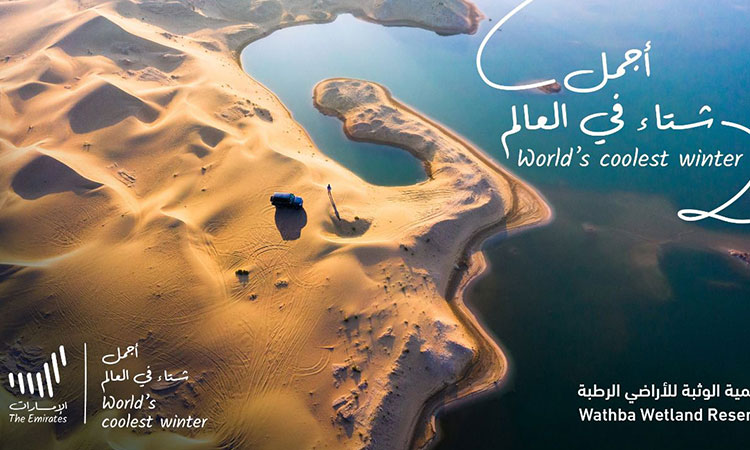 The campaign also sheds light on the most important natural, cultural, heritage, historical and urban areas in the country and I highlight the unique nature of each of the country’s seven emirates. 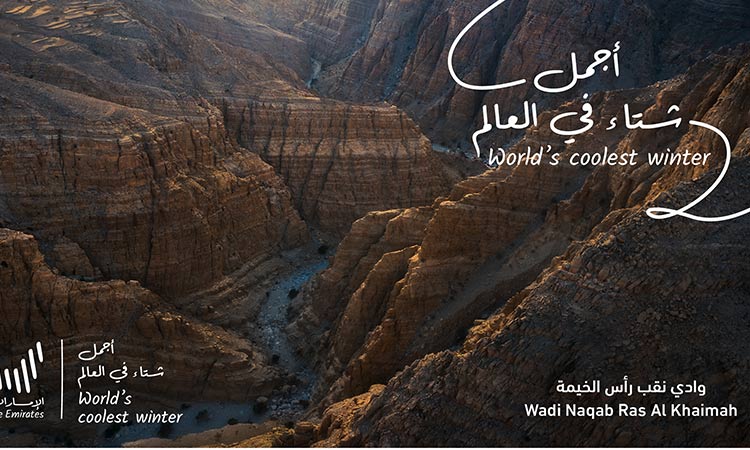 The campaign focuses on the welcome and hospitality to be found in the Emirates, making people from everywhere feel comfortable relaxed and at home.