Statuettes depicting the Egyptian goddesses (L to R) Isis (Iset) and Nephthys (Nebet-Het) and other sarcophaguses displayed after their discovery. AFP

Egypt on Monday unveiled a cache of sarcophagi and bronze statuettes — including one of pioneering architect Imhotep — at the Saqqara archaeological site south of Cairo.

They were the latest in a series of discoveries made in the area.

Among the 150 bronze statuettes unearthed in the latest findings is one of Imhotep, who “revolutionised architecture” in the ancient world, Mostafa Waziri, head of Egypt’s Supreme Council of Antiquities, told reporters. 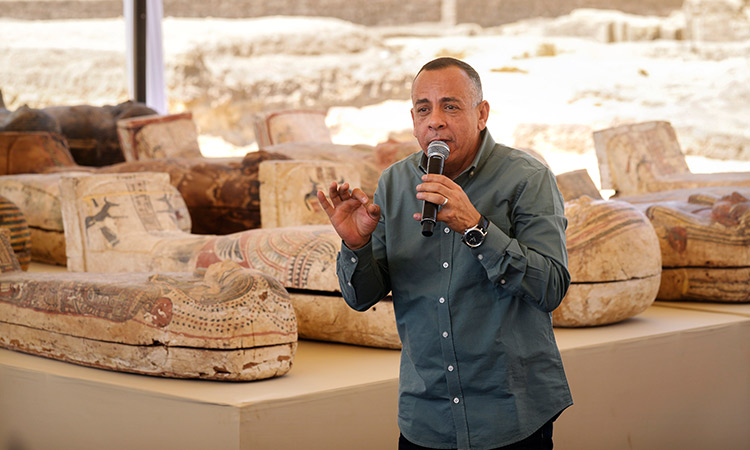 Mostafa Waziri, secretary-general of the Supreme Council of Antiquities, speaks during a press conference. AFP

Imhotep, who lived in the third millenium BC, built the Djoser step pyramid, one of the earliest in ancient Egypt. He later became the god of medicine.

Waziri revealed a goal for the archaeological mission, which has so far undertaken four seasons of excavations in the area: “To find the tomb of Imhotep.”

Other unearthed statuettes depict various gods and goddesses including Bastet, Anubis, Osiris, Amunmeen, Isis, Nefertum and Hathor, according to a statement from the Ministry of Tourism and Antiquities. 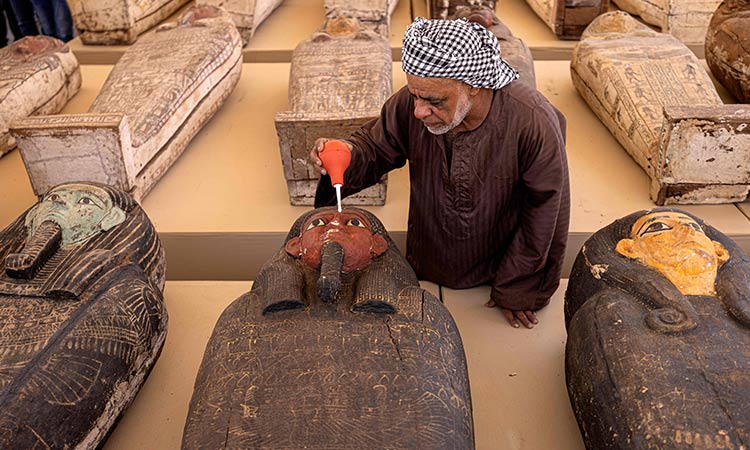 A labourer uses a hand air blower to brush dust off one of the sarcophaguses. AFP

The mission also unveiled “250 wooden sarcophagi with mummies inside, dating back to the Late Period,” around the fifth century BC, Waziri said.

Inside one sarcophagus, the team found an untouched and sealed papyrus, he said. It has been transferred to the laboratory of the Egyptian Museum in central Cairo for full restoration and study, Waziri said.

He added the papyrus — estimated at nine metres (9.9 yards) long — likely contains chapters of the Book of the Dead, collections of funerary texts composed of spells that Egyptian used to guide the dead through the underworld.

The sarcophagi will be moved to the Grand Egyptian Museum, which authorities hope to inaugurate near Cairo’s Giza pyramids later this year after repeated delays. 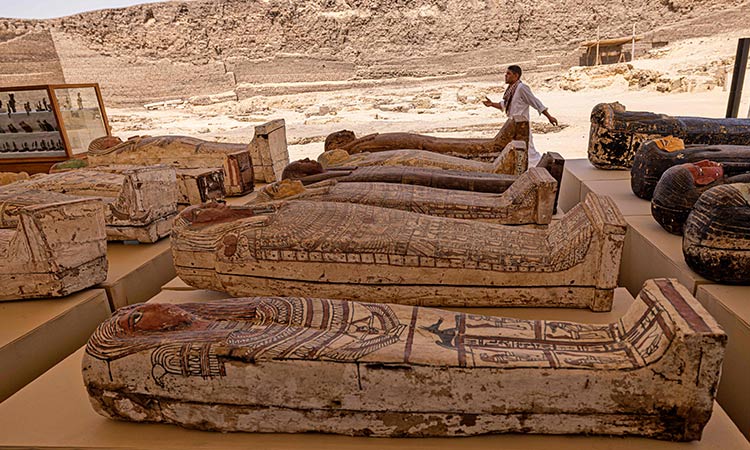 Hopes are high that the new museum, in addition to archaeological discoveries of recent years, will help revive the country’s vital tourism industry.

The sector has been battered by successive blows, including the 2011 revolution and ensuing unrest, the coronavirus pandemic, and now a halt of Russian and Ukranian tourists, who accounted for a large portion of the country’s visitors.

Among other findings at Saqqara, Egypt in March unveiled five ancient Pharaonic tombs, and in January last year announced the discovery of more than 50 wooden sarcophagi dating from the New Kingdom which ended in the 11th century BC.